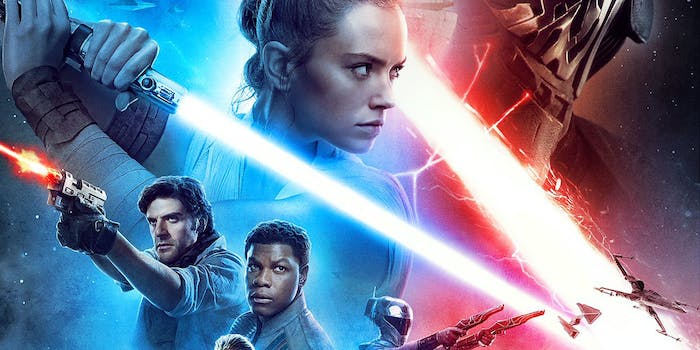 How to watch ‘Star Wars: Rise of Skywalker’ right now

The end of a saga, a story that will last forever.

The third Star Wars trilogy is officially ending. The adventures of Rey, Poe Dameron, Flynn, and yes, even the ubiquitous neurotic android C-3P0 are about to be wrapped up in a bow. A space bow.

After the events of The Last Jedi, the Resistance is once again on the run from the First Order after an insurrection at the hands of Kylo Ren puts the Solo sad boy at the head of this monstrous fleet. Plus, old friends and old enemies are back in what may be Star Wars’ most action-packed film yet.

Here’s everything you need to know to rent or buy Star Wars: Rise of Skywalker.

How to watch Star Wars: Rise of Skywalker

The following are a few venues where you can rent or buy Star Wars: Rise of Skywalker. The easiest way to stream, however, is by streaming it on Disney+.

Fandango and movies go hand in hand, and not just when it comes to buying tickets online. Plenty of cinematic hits and classics are available to purchase or rent on-demand straight from the Fandango Now library, along with full seasons of your favorite shows. Movies and shows are also available in multiple formats, including UHD 4K. If you join Fandango VIP, you can rack up points to spend across Fandango and Fandango Now.