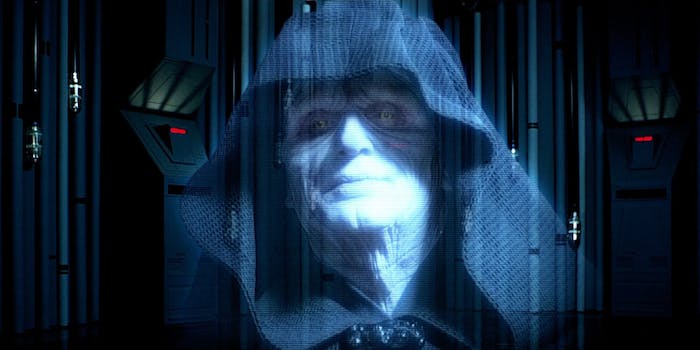 Turns out Palpatine was a clone in ‘Rise of Skywalker’

Fans are not impressed by this explanation.

“Somehow, Palpatine returned.” This comically nonspecific explanation became a meme after The Rise of Skywalker came out, focusing the derision of fans who thought the movie made no sense. Not only did Palpatine feel like a weird addition to the third film in a trilogy, but his resurrection really wasn’t explained. That changed with the film’s novelization, which reveals that Palpatine… is a clone? Well, OK then.

Written by Rae Carson, the Rise of Skywalker novel fleshes out a bunch of stuff that didn’t appear in the film, ranging from characters’ internal motives to moments we didn’t see on-screen. That’s par for the course for this kind of movie novelization, which combines unseen elements from the film’s shooting script, input from the studio, and creative license from the author herself.

The book isn’t out until March 17, but a few advance copies have gone on sale, and Screenrant published an excerpt explaining how Palpatine returned from the dead. During the film’s opening scenes, Kylo Ren arrives on the planet Exegol, where he sees an ailing Palpatine hooked up to a kind of life support system. He identifies Palpatine’s body as a clone, housing Palpatine’s undead spirit:

“All the vials were empty of liquid save one, which was nearly depleted. Kylo peered closer. He’d seen this apparatus before, too, when he’d studied the Clone Wars as a boy. The liquid flowing into the living nightmare before him was fighting a losing battle to sustain the Emperor’s putrid flesh.

“What could you give me?” Kylo asked. Emperor Palpatine lived, after a fashion, and Kylo could feel in his very bones that this clone body sheltered the Emperor’s actual spirit. It was an imperfect vessel, though, unable to contain his immense power. It couldn’t last much longer.”

So, the reason why Palpatine looks like his old self is because his new body is decaying, bringing him back to the wrinkled, infirm state we saw in the original trilogy. Depending on your willingness to suspend disbelief, this may or may not be a satisfying explanation. This is a fantasy franchise, so “undead clone resurrection” is a totally acceptable reason for a famous character to return. There’s also a long canon history of characters harming their own bodies by using the Dark Side. However, the fact that he looks the same as in previous movies is pretty confusing from a basic storytelling perspective. Without an on-screen explanation for the whole clone thing, it just seems like Palpatine magically survived his previous death, like several other Rise of Skywalker characters whose “deaths” turned out to be frustrating fake-outs.

The Rise of Skywalker novelization is sure to explain plenty of other discrepancies in the movie, inevitably fueling the fire of Star Wars canon debates. Palpatine’s death, however, is really the big one. It’s a massive, controversial twist that arrives out of nowhere in the first scene of the movie, changing the course of the trilogy. And unless you read the book—which comes out three months after the movie—then you never get an adequate explanation for how Palpatine came back.

When you’re watching a fantasy blockbuster like Star Wars, you need to accept a certain amount of nonsense. But for a lot of fans, Palpatine’s return was a step too far. In a franchise with space wizards and laser swords, the explanation didn’t have to be scientific and sensible—but it did need to exist, and make some kind of thematic sense within the main plot. The Rise of Skywalker failed on both counts.