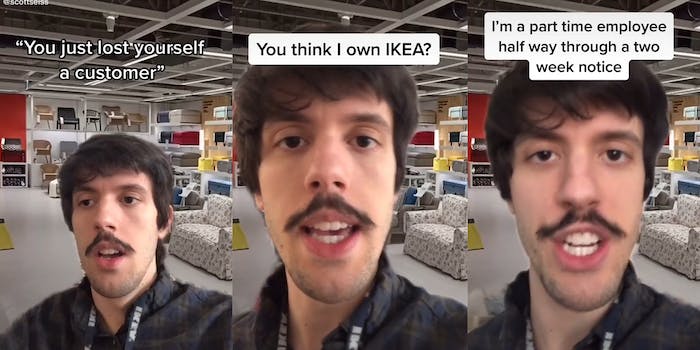 Scott Seiss knows how to employ the TikTok 'drama' sound.

Hell is other people, something that’s only been reinforced during the pandemic. Comedian Scott Seiss’ TikToks get at the inanity of working customer service.

Seiss’ videos are fairly recognizable: He uses an IKEA greenscreen, with his face in the foreground. (Sometimes there’s a lanyard.) He’s also skillfully employed the Bad Girls Club drama sound, turning dumb questions—Do you work here? Can you just check in the back?—into dramatic confrontations.

Seiss tells the Daily Dot he worked at a Baltimore IKEA for three years, while doing improv and standup comedy in the evenings. But he only started making these videos in February—the BGC sound inspired him to write “a few retail-specific ones.”

This week, Patton Oswalt elevated his content on Twitter, and LeBron James retweeted one of his TikToks, with the caption, “I’m literally shedding tears right now.”

Seiss, who’s from Baltimore but currently based in New York City, says he’s even had several former IKEA co-workers message him about his “viral moment”—and to look back on all their fond memories.

“I was over the moon that all these comedians I really look up to were liking it and then when LeBron James said he was in tears watching, I lost my mind,” Seiss says. “And the fact that people working often thankless jobs are enjoying them means the world to me.”