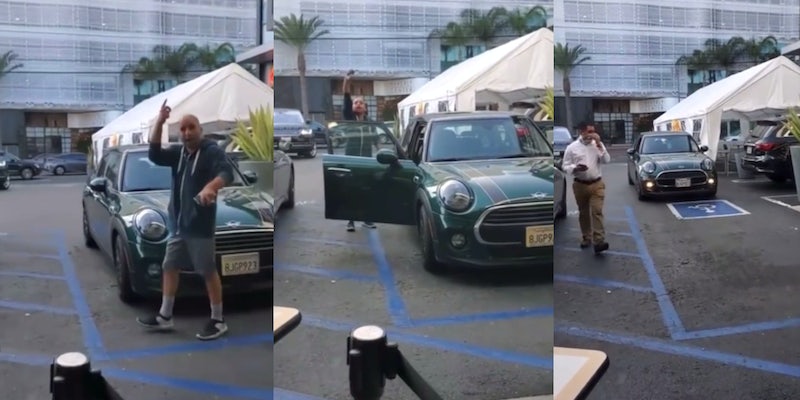 'Can you fit any more right wing buzz words in that short of a rant?'

The last year has seen the rise of full-blown adult temper tantrums, as anti-mask Karens the world round go viral.

Yet another so-called “Karen” has gone viral on Reddit after staff at a Jamba Juice refused to serve him without a mask, per Fox 11. A cell phone video shows a man, after being told to leave a Los Angeles Jamba Juice, spewing racist, radical conspiracy theories to bystanders.

The man is being escorted from the establishment as the video, first shared by Instagram user bellikemike, begins. An employee politely holds the door open for him, as the male Karen berates her.

“That’s all you do, you work at Jamba Juice,” the anti-mask Karen says, before getting racist: “Go back to your country!”

As Jamba Juice Karen crosses to his car, the person filming earns another outburst after mocking his insult. The next portion of Karen’s rant is drowned out by a loud noise, but his eventual invitation for the person filming to “Record me!” is obliged.

Jamba Juice Karen, apparently committed to his tantrum, starts telling anyone who will listen to “Go back to your country” as he enters his car. “All you fucking rebels, all you fucking Commies, get the fuck out.”

A rant of this sort apparently isn’t complete without going full Nazi, so Jamba Juice Karen throws in a few oddly pronounced “hail Hitlers” to really drive the point home. He even throws up a few Nazi salutes.

The cherry on the top of an already absurd outburst—over a smoothie, don’t forget—is the sight of Karen backing out of a handicapped parking spot. No handicap placard is visible on the vehicle, indicating that Jamba Juice Karen—on top of spouting Nazi slogans—also doesn’t mind inconveniencing others.

As the car pulls out, a single voice cuts through the noise to bellow that “You’re missing a chromosome you fucking idiot,” earning laughter from the surrounding patrons. Jamba Juice Karen seizes one final chance to toss in a right-wing buzz word and finishes his viral moment with a claim that “The election was stolen,” before the footage concludes.

The video, which was initially shared to bellikemike’s story, eventually migrated to Reddit. There, it racked up nearly 600 upvotes overnight, and plenty of disparaging comments for Jamba Juice Karen.

“Never thought about it before this video, but you can’t really storm off in a Mini Cooper,” one commenter noted.

“Can you fit any more right wing buzz words in that short of a rant,” another observed.

Other comments noted that the man’s distinctly non-white complexion likely would have disqualified him from the Nazi party, a fact that was apparently lost on him.

“I hope we see this guy on r/byebyejob,” one viewer wrote.