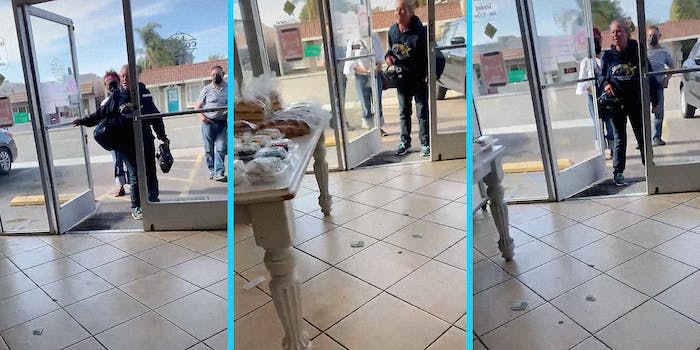 ‘What’re you gonna do, b****r?’: Karen throws racist tantrum after getting kicked out of Mexican bakery over mask

The La Concha Bakery becomes host to a viral meltdown.

In a viral TikTok video, a red-faced Karen calls a San Diego-area bakery owner a “beaner” and a “fuck-face.”

Posted this weekend by @marirod_73, the viral video shows the red-faced Karen at the door of the highly-rated La Concha Bakery in Chula Vista, California with her mask off. Some loose paper currency is on the ground. There’s clearly been some disagreement over how her mask was worn.

“What’re you gonna do, beaner? Fuck you. My face was covered,” the red-faced Karen continues, almost as a single, run-on sentence. “Now kick me out. That’s funny to you, fuck face?”

The red-faced Karen adds: “I hope you crack your fucking skull, with your kid up your ass.”

This insult does not appear to make any sense.

The Daily Dot was not able to independently verify whether the video was actually filmed by @marirod_73 or when. The version posted this week already has more than 69,000 views. @marrirod_73 does comment on her video that she and her husband were in the store during the incident and that it was difficult to record.

The racist then proceeds to mock them about the mask situation, in such a way, that only she looks ridiculous: The people behind her aren’t sure what they should be doing.

The bakery proprietor tells her to get out. Red-faced Karen says it’s funny she’s being kicked out for wearing a mask. She leaves angry as the video ends.