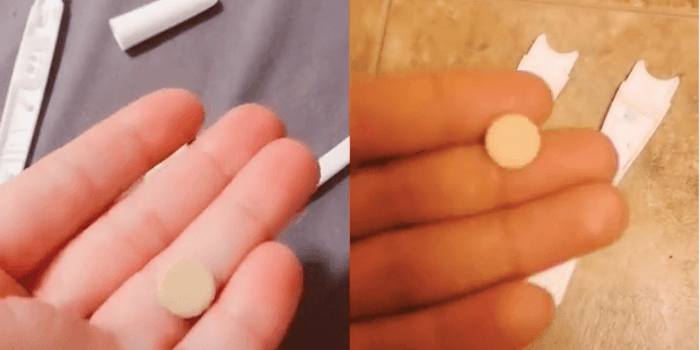 It's definitely not Plan B.

Teens are joining in on a dangerous TikTok trend called the “morning-after pill challenge.”

TikTok users discovered there is a small tablet inside pregnancy tests and falsely claimed it was the Plan B pill, which helps prevent pregnancy after unprotected sex. Others are now joining in on the “challenge” by busting open pregnancy tests to show off the “pill” inside.

To set the record straight, pregnancy tests do not contain Plan B pills, or pills of any kind, and the tablets should not be ingested. But that hasn’t stopped teens on TikTok from participating in this challenge.

One TikTok, by @lil_spolar, showed the tablet inside a pregnancy test and was simply captioned, “what is this?” The video has about 50,000 likes and over 500 comments. Some people commented saying it was a Plan B pill.

“You put it in a bucket of water and your baby grow up 9 months early,” another user commented.

Others made it clear the tablet was definitely not Plan B.

“It’s for moisture. It helps keep the product from getting ruined before it’s opened,” one user commented.

From there, the trend of teens opening the pregnancy tests to reveal the tablet spread on TikTok and Twitter.

bet y’all didn’t know there was a plan b pill inside a pregnancy test pic.twitter.com/SkhbvqUt1m

Clearblue, the company that manufactures the pregnancy tests featured in the TikToks, has warned consumers against ingesting the tablet.

“Clearblue pregnancy tests do NOT contain Plan B pills,” Clearblue wrote on its website. “All our tests have a small desiccant tablet which is included to absorb moisture and should not be eaten. If accidentally ingested we ask people to please seek medical advice and for any further questions contact our careline at 1-800-321-3279.”