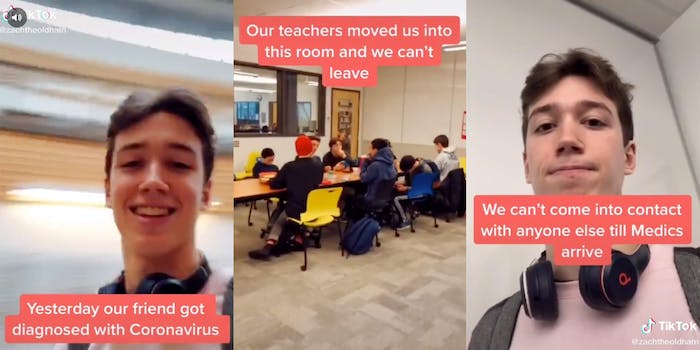 Teens on TikTok are faking having the coronavirus

TikTok takes down 'deliberate attempts to deceive the public.'

A video that shows a teen claiming he has the deadly coronavirus has been determined fake and removed multiple times from TikTok.

The Daily Beast reported on Tuesday that a teen from Vancouver, Canada, posted a TikTok video showing a friend feigning sick and attempting to convey symptoms of the coronavirus. The clip said, “Our friend was being monitored for Coronavirus,” then showed a screenshot of a doctored news article about “the first presumptive case of the new coronavirus case in British Columbia.”

Stephen May, a spokesman for the British Columbia Department of Health, called the TikTok “fake,” according to the Daily Beast.

The Daily Beast reported TikTok had taken down the video. But the user, @zachtheoldham, had reposted the same video by Thursday morning with the caption “TikTok deleted this at 4.6 mil… #censorship #fyp #s2sp #coronavirus.” After the Daily Dot reached out to TikTok for comment, the video was again removed.

“While we encourage our users to have respectful conversations about the subjects that matter to them, we remove deliberate attempts to deceive the public,” a TikTok spokesperson told the Daily Dot.

@zachtheoldham did not immediately respond to the Daily Dot’s request for comment.

The original post had “4.1 million views, 817,000 likes, and 5,100 comments,” according to the Daily Beast. On TikTok, @zachtheoldham’s bio currently reads, “The First Virus Video was deleted.”

In another video posted Wednesday, @zachtheoldham claimed he and other students were quarantined for the virus.

The clip shows a room of students with the caption, “our teachers moved us into this room and we can’t leave.”

A recent search from the nonprofit think tank Media Matters “found multiple videos on TikTok spreading baseless claims and debunked conspiracy theories” about the coronavirus. One theory spread on the platform claimed the virus was created as a form of “population control.”