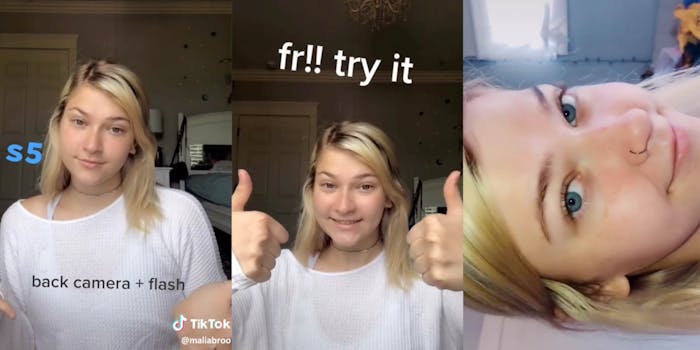 'Girl I went blind, and it still doesn't work.'

A color-bending TikTok trend with potentially dangerous consequences has made its way to Twitter.

Called the “eye challenge,” users take videos of their eyeballs with flash and then apply TikTok’s S5 filter to create the illusion of their eyes changing colors. The trend, which gained steam last summer and made splashes in the fall, is said to have originated from TikTok user @3ys7pb6n (formerly @Maliabroo), according to the Daily Mirror.

Her original video got over 11,000 likes and encouraged copycats. But there are risks of placing your eye so close to bright light for extended periods of time. One user commented the trick made them feel “blind.” User @maryvibin said, “Girl I went blind, and it still doesn’t work.”

User @3ys7pb6n did not respond to the Daily Dot’s request for comment.

The trend appears to have come and gone on TikTok, with the most recent wave of “eye challenge” videos appearing in December. But recently, Twitter users have been posting their experiences with the eye-changing trick.

Some users said the method helps to enhance their “true eye color.”

i found this thing on tiktok where if you use the s5 filter and flash it shows your "true" eye color?? so here enjoy my eyes that are literally every eye color combined pic.twitter.com/cqyzr2NFOD

It’s not the first concerning eye-color trend to start on TikTok.

Newsweek reported back in April that one trend had users putting “jelly, hand sanitizer, bleach, and shaving cream” in a plastic bag and then held “that bag against eye for at least a minute” in order for their eyes to change color. After it became popular, the user who originated the trend, Greg Lammers, warned users of possible health risks, according to Newsweek.

“Dig a little deeper into the people who create challenges to see if they are real and safe,” Lammer said.

If users are opting for a flash-free way to attempt to change their eye color, there is an alternative, according to the Daily Mirror. Simply utilize TikTok’s effects feature and tap on the smiley face with blue, glittering eyes to get an easy, risk-free change in appearance.