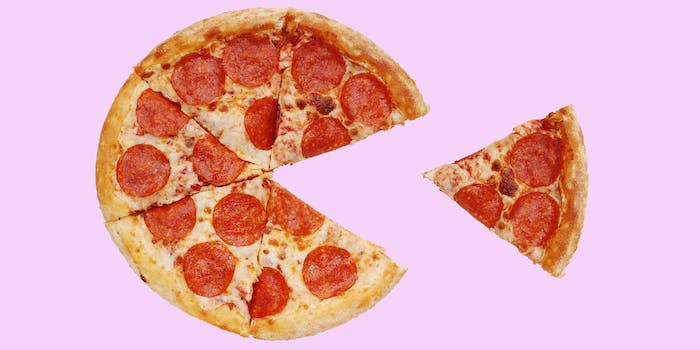 'You kidding me?' the worker says before opening the box, taking a slice of pizza, and eating it.

Filmed via a doorbell camera, the video shows a Pizza Hut worker delivering a pizza to someone’s house. The customer left a sign on their front door saying, “No money for tip, please take slice of pizza.” After reading the sign, the delivery guy says out loud, “You kidding me?” before opening the box, taking a slice of pizza, and eating it.

This inevitably inspired a lot of debate in the comments. Is this acceptable tipping behavior? After all, pizza workers definitely have access to pizza already. This is not comparable to leaving a money tip. On the other hand, it’s probably better than nothing? It’s also an interesting role-reversal on the viral “hack” showing how pizza workers can steal part of your pizza without you noticing—something that, let’s face it, probably isn’t a real concern.

“No tip… then don’t order,” says one of the top comments on the delivery video. “If you can’t afford a few dollar tip don’t get service,” reads another. A lot of people seem underwhelmed by the idea of tipping a delivery worker with pizza, but there are always some who argue against the concept of tipping at all. “Its not my responsibility to pay employees, I’m not a business owner,” reads one reply. Plus, there are different tipping cultures in different countries, with Americans feeling more strongly about tipping because restaurant workers in the U.S. can be very low-paid.

In the end, though, most people disapprove of the pizza-slice tip. You can’t pay the bills with pizza.