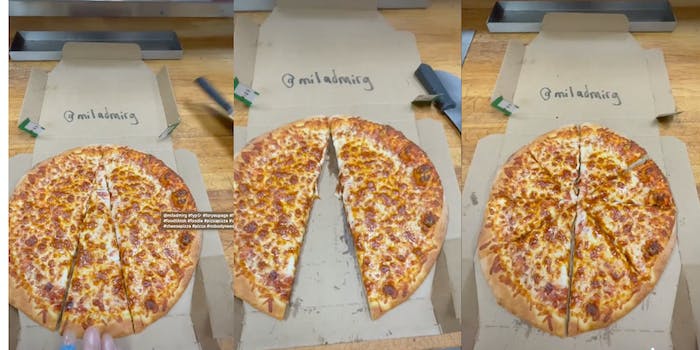 ‘I’m going to be paranoid every time I order pizza now’: Worker shares their ‘hack’ to stealing slice of customer’s pizza on TikTok, dividing viewers

‘Now I have trust issues.’

An employee at a pizza shop went viral on TikTok after revealing how they can steal a slice of a customer’s pizza without them realizing.

In the beginning of the video, the person, under the account “Lonely Pepperoni,” takes a fresh pizza out of the oven.

As they move the pizza over to a delivery box, text appears reading: “When you all buy 1 pizza but you pay more.”

The TikToker then takes out a knife and cuts the pizza twice from the center—exposing a large slice. After removing the middle slice, they push the two remaining parts of the pizza together to create a smaller pizza. Then, they cut the smaller pizza into eight small slices.

While some viewers were impressed with the hack, others felt like they were getting scammed by pizza delivery services.

“Now I have trust issues,” one person commented.

“Omg the deceit,” another said.

“Makes me question everything,” a third wrote.

It wasn’t immediately clear in the video what “Lonely Pepperoni” did with the giant slice. Some viewers, though, wrote that they hoped the TikToker ate the cut piece of pizza rather than throwing it away.

“Where did you put the other piece though,” one said. “Hope it’s being devoured and not garbage.”