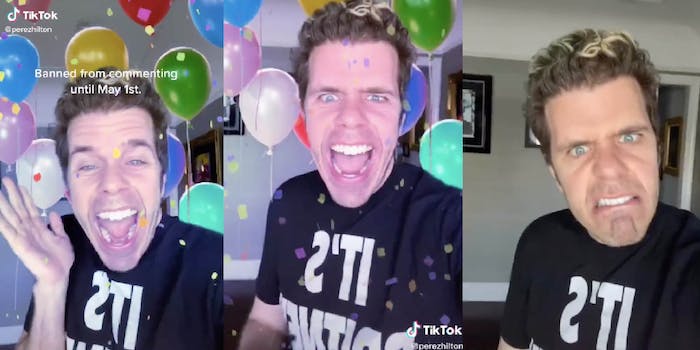 Over 60,000 sign petition to ban Perez Hilton from TikTok for ‘attacking young kids’

After numerous bouts of controversy on Tiktok—which included critiquing one of the platform’s most famous stars—several people are calling for blogger Perez Hilton to be banned from the app.

A petition on Change.org has garnered over 69,000 signatures calling for Hilton’s removal, Distractify reports.

Panahi remarks address a comment Hilton made in response to a TikTok from Charli D’Amelio back in March that showed the 15-year-old dancing while on vacation, Distractify reports.

“Anyone else think it’s inappropriate for a 15-year-old to dance to this?” Hilton commented.

Immediately, users were quick to question Hilton about the attention he gave D’Amelio, who later tweeted, “I will continue to post when i feel happy and confident so if me wearing a swimsuit at the beach is a problem well sucks to suck doesn’t it. ”

Numerous TikToks from Hilton have been called into question for “(teasing) full nudity,” Distractify reports, and the platform also banned one of the blogger’s live streams.

He also has been banned several times from posting comments on TikTok due to his tendency to post on top users’ content, according to Distractify. Just two days ago Hilton posted about how the platform banned him from commenting on videos until May 1.

He captioned the post, “Dear @tiktok, I know that in China they don’t value free speech. I understand why your system works how it does! Get my new memoir! Link in bio!”

Hilton has also been called out for accusing British diver Tom Daley, 25, for kissing TikTok star Tyler Downs, who is 16, the Daily Dot previously reported.

Numerous Twitter users chimed in about Hilton’s behavior on TikTok, expressing worry about his behavior toward teens.

D’Amelio retweeted a screenshot of the petition to ban Hilton from TikTok, and Hilton posted how influencer James Charles liked the tweet.

Called the “a bad-talking blogger celebs love to hate,” the media personality, whose real name is Mario Armando Lavandeira Jr., has caught the ire of countless Hollywood fixtures over the years. As the landscape for media entertainment has continued to evolve, Hilton has racked up a not-so-ideal history with social media websites.

However, Hilton is soaking up the attention from his TikTok controversies. He posted on Twitter and TikTok about coverage of the petition, seeming to relish in being the topic of headlines.

As his latest ban from commenting on TikTok comes to a close, it remains to be seen if his presence on the app will completely wane with time, especially if Gen Z has anything to say about it.