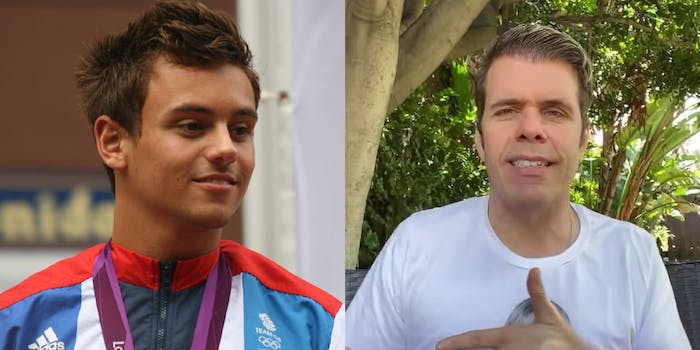 Hilton said he will be handing it over to the authorities. But many are questioning Hilton's allegation.

Perez Hilton tweeted that he has an incriminating video of British Olympic diver Tom Daley, 25, making out with a 16-year-old diver and TikTok star, according to the popular Twitter account Pop Crave.

The gossip blogger tweeted that someone messaged him the video, and he will not be sharing it.

“I am talking to my lawyer about what next steps should be with this video,” Hilton wrote in a follow-up tweet, “and making sure I do my duty to get it into the hands of authorities.”

The alleged video has not been made public by anyone. But one of Hilton’s followers offered some advice about his tweet, writing, “If that video hasn’t been authenticated, even this tweet could subject you to a defamation action. Tread lightly.”

Hilton, who is no stranger to controversy, replied, saying, “It’s definitely him. 100%.”

In a now-deleted tweet, Hilton stated that he deleted his initial tweet on the matter after discovering that “the minor was allegedly drunk when this happened and that he may have been 15 at the time.” He initially reported the alleged minor’s name, which he called a “mistake.”

In more tweets, Hilton reiterated to critics that he is not making the allegation up because doing so could get him “EASILY SUED.”

Neither Daley nor the TikTok star have commented on the existence of the alleged video.