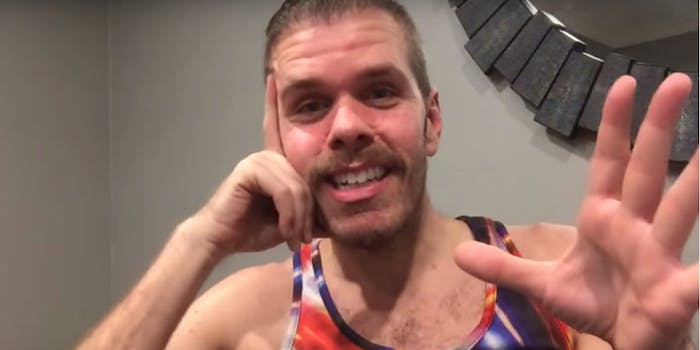 The tracklist of Taylor Swift‘s Reputation already has a reputation.

On Tuesday, the tracklist for her new album leaked online and proliferated on social media. While many fan accounts tweeted photos of the physical CD, blogger Perez Hilton claims he was suspended from his personal Twitter account on Tuesday for tweeting someone else’s photo of the list. He says someone from Swift’s label issued a takedown notice and then his account was suspended. (He’s now back on Twitter.)

This is RIDICULOUS! @TaylorSwift13's label just sent me a takedown notice because I posted a photo of the back of her new CD. #Dumb pic.twitter.com/pyMErNauMs

Swift later posted the tracklist—which confirms a collaboration with Ed Sheeran and Future—on Instagram, but Perez said if a lawsuit were threatened, he’d “hit up the ACLU,” referencing Swift’s recent legal threat against a writer who penned a piece about the singer’s music and the white nationalist movement. Hilton claims he’s now felt “Taylor’s wrath.”

tryna decide how to feel when Perez Hilton gets suspended from Twitter but it’s bc of Taylor Swift pic.twitter.com/GsMRKe5Y15

All of this is great table-setting for an album called Reputation, and it got fans engaging with the Swift brand for better or worse. In the lead-up to the release, Swift has been mostly absent from the public eye while she readjusts her image, but the machinations of the Taylor Swift publicity machine can still be seen. Maybe a feud with a gossip blogger is just one of its parts.

Forgot to show the back of the Target magazines 😂 on Friday you can get your hands on this quality reading material. https://t.co/fPhRA1Ocvf pic.twitter.com/w8q9R752vR