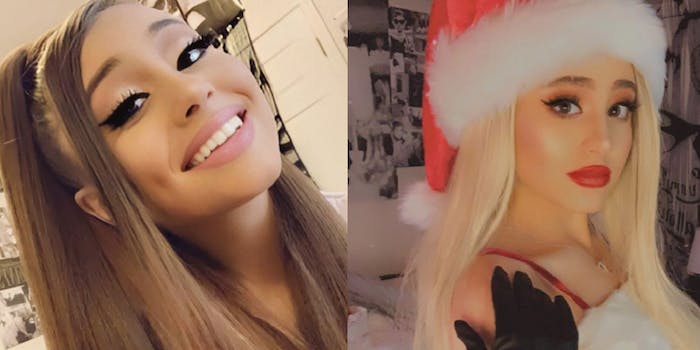 Paige Niemann went viral for terrifying fans with her impersonation of Grande. Now, she's responding to the singer's 'shade.'

Ariana Grande is not having it with these “degrading” imitations of her on TikTok—and her most famous lookalike has something to say about it.

Last November, teenage TikTok user Paige Niemann became an internet sensation for posting videos and photos of herself wearing hair and makeup like Grande’s—and bearing an uncanny resemblance to her.

In one video, Niemann impersonated Grande’s voice as Cat Valentine from the Nickelodeon show Victorious that Grande starred in.

Initially, Grande said that her doppelgänger was likely “the sweetest sweet sweetheart forreal.” But it turns out the bizarreness of the whole act struck a nerve.

On Wednesday, Grande reposted a video by writer and comedian Jordan Firstman to her Instagram Story. In it, he discusses how memes devalue the “something that an artist really poured their soul into.”

Firstman also chided meme creators who assign “a completely arbitrary meaning” to something the original creator “loves so much.”

“Kind of like degrading its entire value,” he said.

Grande appears to agree. On her Instagram Story, she wrote, “Omg can this please also double as your impression of the ponytail TikTok girls who think doing that Cat Valentine voice and that wearing winged eyeliner and a sweatshirt is doing a good impersonation of me…”

“Cause this really how it feels,” the singer reportedly wrote. “‘Degrading its entire value’ I screamed.”

While Grande later deleted the story, she didn’t do so before Niemann saw it—and responded via her own Instagram Live.

“I’m used to Ariana shading me, so it’s whatever,” Niemann said, according to BuzzFeed. “I’m just here to entertain people. It’s not how I am in real life. It’s kind of why I’m not a fan of her anymore, honestly.”