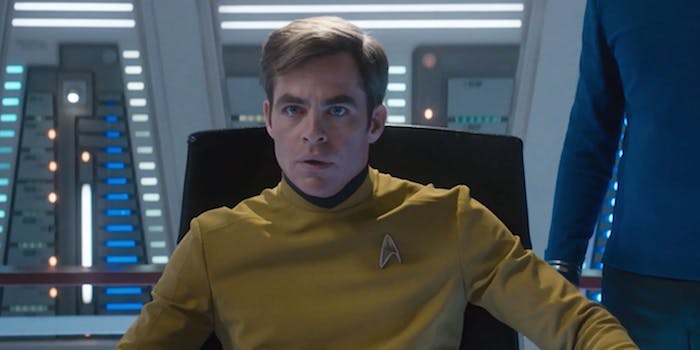 Yet another sequel attempt has fallen through at Paramount. Why?

Once again, Paramount Pictures is struggling with its Star Trek franchise.

A new Deadline report says that Paramount film chief Emma Watts is still trying to “figure out” what to do with Star Trek after the latest of several attempts was “put on pause.”

This was a movie pitch from TV writer/producer Noah Hawley (Legion), whose directorial debut, Lucy in the Sky, was a critical and commercial flop, making him a puzzling choice to revamp such a popular franchise. His story idea required a new cast and reportedly involved a deadly virus, which for obvious reasons is now a divisive topic. So Paramount is going back to the drawing board.

Before Hawley came onboard, there were plans for a direct sequel to the trilogy led by Chris Pine and Zachary Quinto, this time bringing Chris Hemsworth back as Captain Kirk’s dad. For a while, S.J. Clarkson was going to direct—the first female director in Star Trek movie history—but that fell through. Then Paramount tapped Quentin Tarantino of all people to develop a more adult-oriented reboot, with The Revenant screenwriter Mark L. Smith taking over as writer.

There was a lot of speculation about what Tarantino might do (another weird choice for a wholesome, optimistic sci-fi franchise), and now Deadline has spilled the beans. Apparently he and Smith were working on an idea based on the classic Star Trek episode “A Piece of the Action,” a riff on 1930s gangster dramas. So they were basically making… an adult crime thriller disguised as Star Trek? Okay!

The state of the Star Trek movie series is a perennial source of frustration for many fans. It’s hard to see why Paramount can’t get a new movie off the ground, especially with the new (unrelated) Star Trek TV shows revitalizing interest in the franchise.

Plus, the existing cast have only gotten more popular over time: Chris Pine, Zoe Saldana, John Cho, Simon Pegg. From the outside, the main problem is this: Paramount keeps hiring filmmakers who don’t understand or appreciate Star Trek.

J.J. Abrams is the most infamous example, openly saying he didn’t really like Star Trek and radically altering the cast and premise to fit a blockbuster formula. Star Trek Beyond (directed by Justin Lin and co-written by Simon Pegg and Doug Jung) hewed closer to Star Trek tradition and was better as a result, but since it wasn’t a huge commercial success, Paramount decided to explore other avenues instead.

The original Star Trek movies occupied a weird place in the Hollywood landscape, working off a medium budget and starring an aging cast of TV actors. They’re comedic, nerdy, and sentimental, and they focus more on character development and relationships than flashy action sequences.

They also vary wildly in tone, which isn’t a popular idea among brand-conscious Hollywood executives. Yet even now, several of those vintage Star Trek movies (The Wrath of Khan; The Voyage Home; The Undiscovered Country) outshine modern blockbusters with better special effects and more glamorous stars. The key is their great writing and their solid understanding of what makes Star Trek appealing in the first place.

To Star Trek fans, all of Paramount’s recent ideas are mystifyingly bad. Of course, you can see the Hollywood logic in most of them. J.J. Abrams turned Star Trek into a reliably formulaic action blockbuster. Tarantino is an iconic name who adds prestige to a foundering franchise. Recruiting Chris Hemsworth adds another bankable star to the cast. Noah Hawley, well… okay, that one is still puzzling, because his TV work is notably dark and weird. Possibly they were aiming for his movie to be the Logan to J.J. Abrams’ Wolverine.

Basically, Paramount seems determined to make Star Trek profitable in a way that lines up with other Hollywood successes, rather than what worked for Star Trek in the past. Namely a beloved cast (which they already have!), a lower overall budget, and a quirky idea by a good writer who actually enjoys and appreciates the innate strengths of Star Trek. These movies don’t need to compete with Star Wars or Fast and Furious. They need to be recognizably Star Trek, standing out from Hollywood’s constant stream of identikit action/comedy blockbusters.