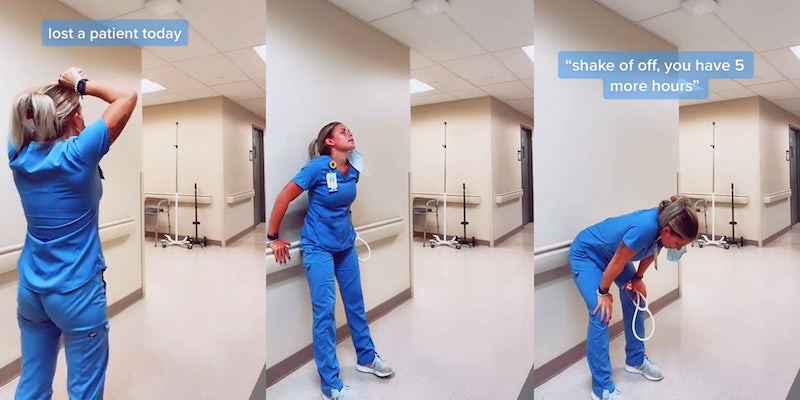 ‘Ain’t no way the first thing that came to her mind was to make a TikTok’: Nurse mocked for making TikTok after patient allegedly dies

'The last thing I'd do is make a video. What the hell?'

A TikTok made by a purported nurse revealing a patient died is getting widely criticized by users, with many of them accusing the user of clout-chasing.

The TikToker, who posted under the handle @olivia_tylerr33, has since deleted their account and video, although the video has been widely stitched, duetted, and reposted not just on TikTok, but on other social media platforms, too. The TikTok depicts the nurse crying and pacing while on-screen text reads, “Lost a patient today. Shake it off, you have five more hours.” Sia’s power ballad “Unstoppable” plays in the background.

On TikTok, actor Luke Cook mocked the nurse by pretending to be her co-worker who filmed the clip. “Nice,” Cook says in a stitch that’s been viewed 3.6 million times. “Put some emotional music over that, you got a viral hit on your hands. Uhhhh, we should probably tell the family now, huh?”

The TikTok eventually made its way to Twitter, where a user tweeted out the video with the caption: “Medical workers stop posting TikToks challenge (impossible).”

“The last thing I’d do is make a video,” another Twitter user said. “What the hell?”

Another added, “When you are emotionally upset at the loss of a life (rightfully so) but then draw attention to yourself so others can see that you’re upset, then it is no longer about the person who died or their memory, but rather about yourself. That is called narcissism.”

Despite the backlash this TikTok caused, there were some who continued to defend the nurse on Twitter. “Everyone is calling this cringe etc, but I don’t feel like it’s automatically performative or whatever. I’m sure it’s hard to lose a patient,” one Twitter user wrote. “And I’ve taken selfies while crying my eyes out. Sometimes you just wanna feel seen when you’re going through it.”

The user’s account has since been deleted, and the Daily Dot have been unable to find an alternative means of reaching out to them for this piece.