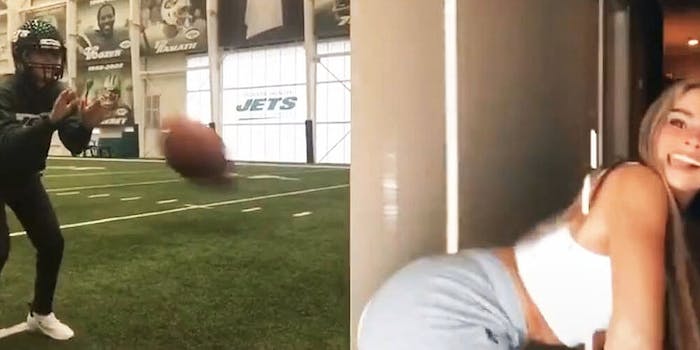 It’s always a challenge for brands to keep up with the youths without coming off like that “how do you do, fellow kids?” meme from 30 Rock. At least, that’s the only way to explain this TikTok misfire—pun fully intended—from the New York Jets.

On Monday, the official TikTok account for the football team uploaded a clip of a teen (or young woman) dancing to Shake Dat by Loui (feat. Lil Jay). As she bends down to do a twerk, a football shoots out of her butt, which is caught by a quarterback off-frame.

“Whoever runs the Jet’s official Tik Tok account is about to be promoted or fired,” wrote Twitter user @isabella_nowak, who shared the clip shortly after it was uploaded.

Whoever runs the Jet’s official Tik Tok account is about to be promoted or fired pic.twitter.com/SDdTMAEmwi

The TikTok was not long in this world, which apparently wasn’t ready for maybe-underage girls farting (pooping?) footballs out of their behinds. The clip was removed from the team’s account within the hour.

Unfortunately for the New York Jets, trying to take something off of the internet is like trying to take pee out of a swimming pool. The inexplicable clip has taken on a new life on Twitter as people share it and try to wrap their minds around the whole thing.

The Jets have an, uh, interesting TikTok feed pic.twitter.com/GlnVq5Nkmo

The Jets have discovered TikTok and uhhhh pic.twitter.com/ePV0K8tEfS

The Jets getting a lot of flak for this being inappropriate.

1/ It seems on brand for the TikTok platform
2/ If anyone is offended by it, I’m hoping it’s because of that throwing motion on the left. The snap was solid. #smsportspic.twitter.com/sMhGagiCTU

Given that the New York Jets went 7-9 in 2019, narrowly missing the playoffs (and making it nearly a decade since the team has survived until postseason), this is certainly one way of getting people talking. Maybe they should double down on the tactic. But next time, make sure everyone knows the model is over the age of 18.