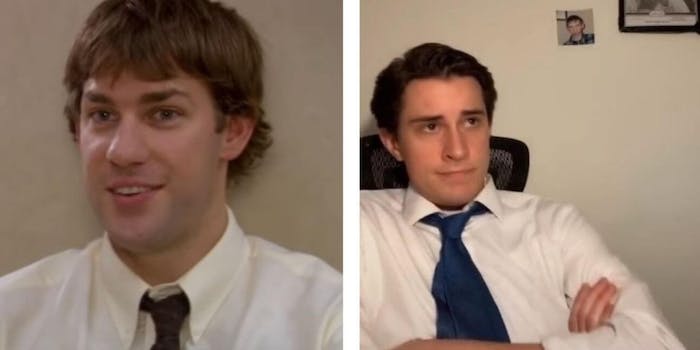 His impersonation is spot-on.

Nineteen-year-old Luke Lorraine (@WavyMcGrady) recently shared a video where he’s dressed as Jim, lip-syncing the lines of The Office‘s iconic office showdown between Jim and Dwight Schrute. The clip has gained more than 300,000 likes in just two days.

He has a second clip with him as Jim, doing the famous engagement scene–with a phone he bought at Goodwill just for the reenactment. That one has more than 290,000 likes as of this writing.

As an aspiring musician, Lorraine regularly posts videos of himself singing on his TikTok. However, his Jim impression, complete with the personality quirk and requisite smarm, could have people believing he should get into the acting game.

“It’s funny, even the facial expressions I do naturally make my mom say, ‘That’s so Jim,'” Lorraine told Popsugar. As for how much Lorraine has seen The Office, he said that it’s been “a bunch of times.”

Other Office fans can currently watch all nine hilarious seasons of the NBC series on Netflix, though it is leaving the streaming platform in 2021. However, not long after, the comedy will be back online to stream–but will air exclusively on NBC’s upcoming streaming platform, Peacock.