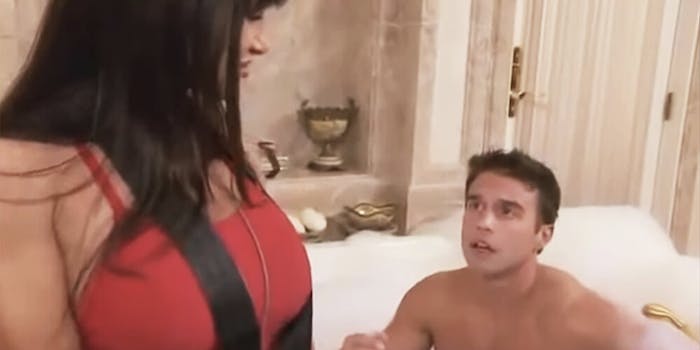 The beloved meme is now a viral challenge.

Has this ever happened to you? You’re taking a leisurely soak in the tub and then some busty broad interrupts bath time to berate you for not having a lifeguard at your beach, and you’re like, lady, “I’m not at the beach, this is a bathtub,” plus it’s only two feet of water anyway? But then she insists and makes you get out of the water over a shark sighting, but it’s OK because you end up having sex with her?

Given the inherent hilarity of the “this is a bathtub” dialogue, however, the (safe for work) clip quickly began being circulated on Tumblr, and eventually, the YouTube channel The Party uploaded the full scene of dialogue, which has since been viewed over 1.1 million times in recent years.

The clip has been widely compared to the viral James Deen “Lemon Stealing Whores” clip in terms of complete absurdity, in which a couple waxes poetic about their prized lemon tree, as a woman wearing a swimsuit steals the lemons from right behind their backs.

But then, earlier this year the “this is a bathtub” meme took on a whole new life when it began to be circulated on TikTok, as users began uploading dubbed versions of themselves acting out the scene.

KnowYourMeme writes that the first known instance was on Feb. 17, when TikTok user @dana_prenger uploaded the following version that has since received over 481,600 likes and 6,200 shares over the course of eight months.

From there, others began sharing their own versions and it has since become a whole entire thing, as you can see from a handful of “this is a bathtub” copycats, below:

This example was uploaded on Halloween:

Sadly, we never did find out what became of the (surely, soon to be happy) “I’m not at the beach, this is a bathtub” couple. But we have a distinct feeling they both ended up more dirty than clean.