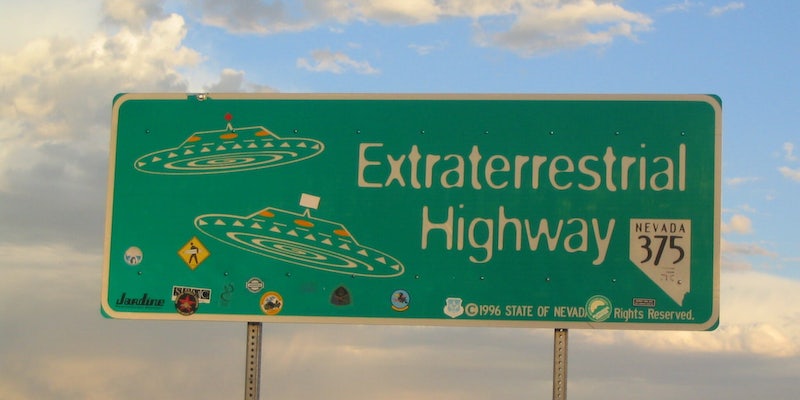 Officials are preparing for the event 'Storm Area 51.'

Nevada officials are not playing when it comes to the “Storm Area 51” event.

The event is apparently actually happening and is expected to take place in Lincoln County—a small county in rural Nevada that is home to the U.S. Air Force base known as Area 51.

The county, which only has about 184 hotel rooms, is expecting thousands of visitors, and many officials fear the influx of visitors could cause a few problems. According to the Associated Press, Lincoln County Sheriff Kerry Lee has already met with state emergency planning officials in regards to the event.

“Oh, we’re very much taking this seriously,” Lincoln County Commission Chairman Varlin Higbee told the Las Vegas Review-Journal. “With the possibility of 35,000-40,000 people showing up, yeah, this is serious.”

Lincoln County issued an emergency declaration to help with the influx of people who are planning to come. This comes after “Storm Area 51” went viral on social media, in which millions expressed their interests in actually showing up.

Now, county officials are worried about the overcrowding of campsites, gas stations, and a surge which could knock out cell phone towers.

“The cellphone system is going to go down,” Higbee said. “You get more than a couple of hundred people there, and it’s going to crash. Cell service won’t be available.”

In an effort to move people away from the military installation, the ‘Storm Area 51’ creator is promoting a three-day music festival called “Alienstock,” that will be held at the Little A’Le’Inn in Rachel, a community with about 50 people.

According to Connie West, owner of the Little A’Le’Inn, over 10,000 people are expected to show up.

That same weekend in Hiko, about 45 minutes from Rachel, the Alien Research Center souvenir shop is hosting an exposition. But still, the big fear many officials have is that visitors will come and try to storm Area 51.

The Air Force even released a statement regarding the alleged event, reminding folks that the military “stands ready” for those attempting to enter government property.

“We don’t want them going down to government property; it will probably be blocked off,” he said. “We don’t want civilian people in contact with the military at all. That will get ugly.”

All three events are scheduled to take place the weekend of September 20th.