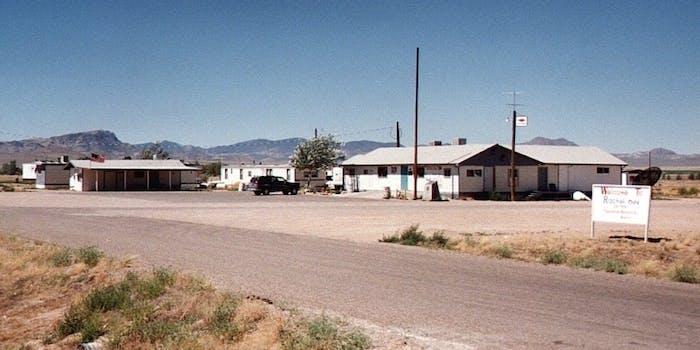 Can they plan a three-day festival in a town with 54 people in under six weeks?

After more than two million people expressed interest in the viral Facebook event “Storm Area 51, They Can’t Stop All of Us,” one thing was clear: a lot of people want to “see them aliens.”

And while it’s unlikely that people will somehow find a way into the classified government facility in Nevada—as the memes suggest—the event’s creator has announced an alternative event during the same weekend. Called “Alienstock,” the free festival will run from Sept. 19-22 and feature live music and art installations. It takes place in Rachel, Nevada—which is located about 50 miles from Area 51.

“We’re aiming to establish something unique here, a meeting place for all the believers,” the description on the event’s site reads. “Come out to the desert to dive into a world full of live music, arts, and camping under the stars.

While “Storm Area 51” creator Matty Roberts has said the Facebook event started as a meme, and he never actually had any intention to “Naruto run” at the military base long-rumored to house extraterrestrial secrets, plenty of people had already made plans to come to Nevada on Sept. 21. The new event looks to address the massive amount of interest around Area 51 and aliens, yet the information on what to expect from the festival is very thin right now, which may not bode well for a festival happening in less than six weeks.

Alienstock won’t charge for admission, saying they want it to be “an experience for every income level” and instead are asking for donations to fund the festival. They say donations will go to food and water, security, portable toilets, stages, and other necessities for putting on a music festival.

Both Alienstock and the town of Rachel have warned that this tiny town with a population of 54 people cannot prepare for the number of people likely to attend Alienstock. “We’re basically taking over the entire town and morphing into a festival! The land owners are totally on board, so we can make this unforgettable!” says the Alienstock website. The town of Rachel seems to have a different view. On the official town website, they warn that they have “no gas and no store,” and deny the festival’s claim that the residents were consulted.

“The residents were not asked and are not on board and will certainly not allow their town to be taken over,” states a warning on the site. “This has a high potential of getting ugly.”