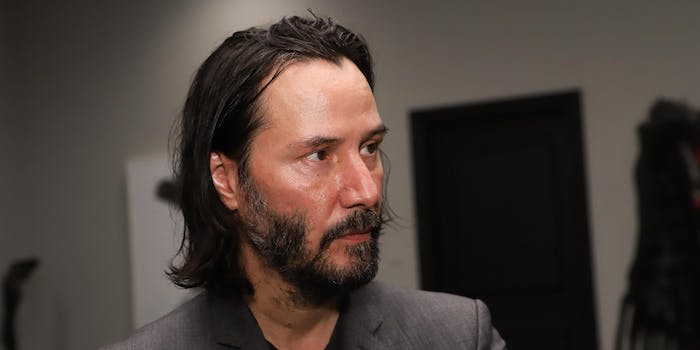 The comic earned some industry backlash for raising money on Kickstarter.

Crowdfunding really can make dreams come true! This week, a little-known actor named Keanu Reeves got a Netflix deal for his Kickstarter-funded comic. A Hollywood miracle! How else would he have attracted Netflix’s attention? Anyway, congrats to Reeves and the co-creators of BRZRKR, an action/adventure comic that came out two weeks ago and is already on its way to becoming a multimedia franchise.

BRZRKR earned some pushback when it was first announced because while everyone loves Keanu Reeves, some people take issue with rich and/or well-connected people using Kickstarter to fund their creative projects. These criticisms also tied into the way non-famous comics creators are notoriously underpaid in the industry.

Reeves collaborated with writer Matt Kindt and artist Ron Garney to create BRZRKR, a 12-issue comic about an immortal warrior. And this wasn’t an indie project. It was already attached to the publisher Boom! Studios, which is part-owned by Disney, and has been accused of underpaying freelance creators.

Some people in the comics industry argued that this book didn’t “need” crowdfunding, and that Boom! Studios was simply capitalizing on Keanu Reeves’ popularity to raise extra money and publicity for the title. To be fair, that strategy worked. The Kickstarter campaign raised more than $1.4 million, with the publisher negotiating a movie and TV deal with Netflix before the book even came out.

Reeves will star in the BRZRKR adaptations, which (so far) consist of a live-action movie and an anime series. This brings to mind comics like Cowboys vs Aliens, where the original book arguably existed as a springboard for a much more lucrative movie deal. On the other hand, plenty of people will be very excited to see Keanu Reeves play an immortal warrior, and were happy to throw money at his Kickstarter. Like The Old Guard, this film will probably be a hit for Netflix, and overshadow the source material altogether. That’s the power of Keanu.