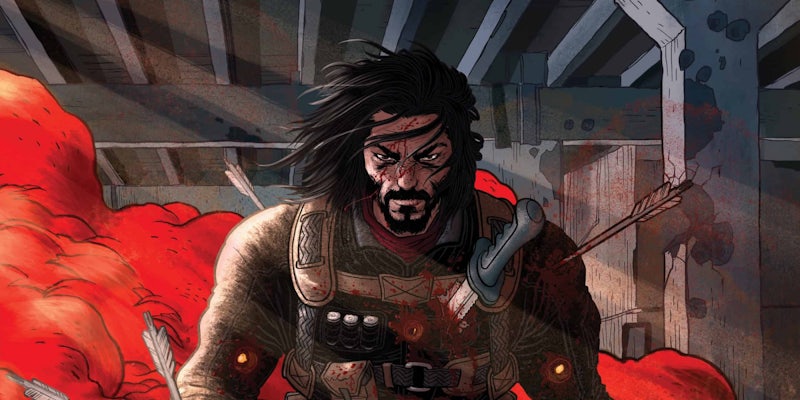 Keanu Reeves is collaborating on a graphic novel called BRZRKR, telling an action/adventure story about an immortal warrior. So far, so good. Co-created by a team of comics industry professionals, the book will be published by Boom! Studios. It’s also being sold through Kickstarter, an idea that’s earning some pushback from others in the industry.

Why is a mainstream publisher crowdfunding such a big project with a wealthy celebrity attached? It’s an especially contentious issue when you know the publisher’s reputation for underpaying less-famous creators.

Boom! Studios is the publisher behind hit comics like Lumberjanes and Giant Days, along with numerous licensed tie-ins for things like Steven Universe and Disney cartoons. It’s also part-owned by Disney and has a TV deal with Netflix. On paper, this doesn’t sound like the type of indie outfit that usually relies on crowdfunding—but it makes more sense when you understand how Boom! Studios is using Kickstarter.

The BRZRKR campaign (which has already raised more $280,000) allows Boom! to sell a wide range of limited editions and extra merchandise including $1,000 boxed sets. Kickstarter is a more efficient way to get those products to their target audience and to promote the comic in the first place. So while there’s always pushback when thriving businesses or rich celebrities use Kickstarter, this isn’t the main problem people have with BRZRKR. A bigger issue is how Boom! Studios typically treats its creators, who are often low-paid freelancers. Earlier this year, the publisher also came under fire for its new Netflix deal, which means that many Boom! Studios creators may have no control over screen adaptations of their work.

In response to the Kickstarter, one artist pointed out that they were paid just $20 per page to ink the popular Boom! Studios comic Giant Days. This tracks with long-running criticisms of the publisher’s pay rates, which some industry insiders describe as exploitative. Another commenter highlighted the fact that BRZRKR‘s stretch goals were all about offering new products to customers, not rewarding the creators for their work: “For some reason page rate increases aren’t in the stretch goals? weird.”

With independently-run Kickstarters, it’s fairly common to give the creative team a raise if the project reaches a certain goal. For instance, Iron Circus Comics (a successful Kickstarter-centric indie publisher) routinely offers a $5-per-page bonus for every extra $5000 on Kickstarter. This rewards creators for working on a successful project, in an industry where freelancers are often offered shockingly low fees to work on big, mainstream titles.

In a recent interview, Boom! Studios boss Ross Richie said, “We’re not Kickstarting BRZRKR…We’re not raising money; we’ve got the money for it.” This was probably meant to highlight how they’re using Kickstarter as a sales platform, rather than a traditional crowdfunder. However, it also suggests a double standard for how Boom! will treat a Keanu Reeves project, versus a normal comic from a team of underpaid freelancers.