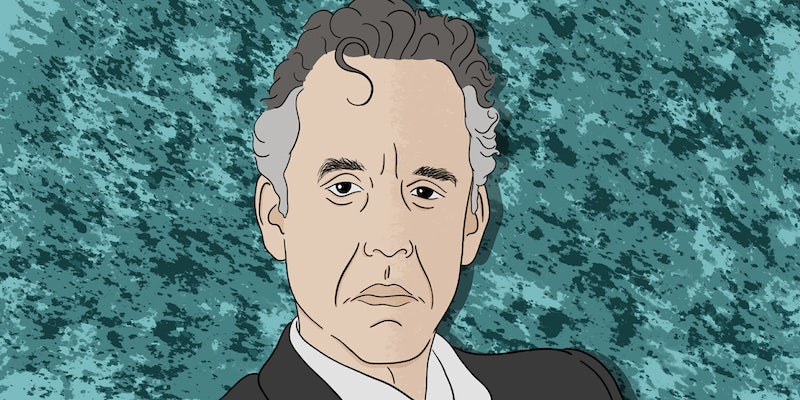 Who is Jordan Peterson, the ‘alt-right’ darling of YouTube?

He's doubled down on some pretty toxic views.

If you hang around intellectuals or academics long enough, one of them will make the joke that they wish they were conservative because there is a lot more money in it. Jordan Peterson is living proof of that.

The Koch Brothers and the Heritage Foundation are eager to fund and promote the brightest minds conservatism has to offer. They intend to use the free market language of the right, there is a high demand for “intellectuals” who will defend conservative ideas, but there is a very low supply.

So if you’re wondering how 55-year-old Canadian psychology professor Jordan B. Peterson became an overnight sensation, going from obscure academic to international bestseller lauded in the New York Times as “most influential public intellectual in the Western world right now,” you don’t have to look much further than that old academic joke.

Who is Jordan Peterson?

Jordan Peterson is famous because in the era of the resurgent alt-right, the loose collection of conservatives that align with white supremacists, there are few intellectuals willing to align themselves with the movement. The alt-right is in need of intellectuals to justify their fascist worldview, and Peterson has been ready.

Until 2016, Peterson languished in relative obscurity. He taught at Harvard and then at the University of Toronto after earning a Ph.D. from McGill. In the fall of 2016, he became embroiled in a controversy that would cost him his teaching position, but would ultimately launch him to stardom.

How did Peterson become famous?

In Canada, as in America, the rights of transgender people have been a hotly debated issue.

Peterson found himself a viral star after opposing a bill known as C-16, which sought to add “gender identity and expression” to laws regarding discrimination. Peterson began his now thriving YouTube career with a series of lectures arguing that asking people to refer to others by their preferred gender pronouns infringes on free speech. His stance on this issue led to an interview with Channel 4’s Cathy Newman which also went viral (the video currently has nine million views).

Suddenly, Peterson was a star with a platform and an eager audience. His views include an Ayn Randian focus on the individual and masculinity, as well as darker viewpoints including “anti-Social Justice Warrior” screeds, critiques of feminism, the suggestion that “political correctness” is the undoing of Western culture, and even the implication that violence against women is okay if the woman deserves it.

If Peterson were to advocate these views outright, without a carefully constructed academic veneer, he would be treated like Richard Spencer or Milo Yiannopoulos. Even more likely, he would be largely barred from the public square. But Peterson cleverly follows the playbook of respectability, cloaking his views in Jungian archetypes, fatherly self-help diatribes, and labored academic language. He lends himself an aura of intellectual seriousness his ideas do not deserve. Beneath all the layers of pretense and respectability, Peterson is making an argument you can find at any bar in America. It’s a hard world out there, he argues, so get what’s yours.

What is Jordan Peterson’s book?

Prior to this year, Peterson’s only published book was a tome titled Maps of Meaning. In this text, Peterson relied heavily on Swiss psychologist Carl Jung whose work involved interpreting life through mythic archetypes or “deeply rooted characters and symbolic motifs that reappear in art, dreams, myths, and religions.”

The primary project of Maps of Meaning was to prove modern culture is “natural.” By this, he means that the structures of society are in place because of how humans are meant to exist in terms both intellectual myth and evolutionary science. This is an incredibly niche subject, but it isn’t hard to see why this would be appealing to conservative defenders of the status quo. His argument boils down to “Make Western Civilization Great Again.”

In January, Peterson released 12 Rules for Life: An Antidote for Chaos. Several hundred pages slimmer than his earlier work, the book mixes his ideas about masculinity, individualism, and mythic destiny with a self-help style manual for living.

12 Rules breaks up his long academic and philosophical digressions into chapters with titles fitting of a book like The Seven Habits of Highly Effective People, like “Stand Up Straight with Your Shoulders Back” and “Be Precise In Your Speech.” With this book, Peterson rebranded as a kind of Malcolm Gladwell of the right, boiling down varied, complicated concepts into digestible chunks that support generally accepted ideas that he can then use to bolster his misogynistic, bigoted, reactionary worldview.

In the book and lectures, Peterson contends that a man should be a dominant figure. It is feminine aspects, Peterson argues, of society that prevent men from self-actualizing. “Boys are suffering in the modern world,” he cautions his audience. The only way to stop the suffering is to “toughen up.” He refers to his female critics as “rabid harpies.”

Taking into account Peterson’s audience and particular appeal, this approach makes sense. Whether you want to talk about the alt-right, Proud Boys, Pepes, gamers (Peterson counts PewDiePie among his fans), or the “economically anxious,” there is a mass of young, underemployed white men who chafe at the modern liberal answers society provides. Peterson offers them a role model, a mentor, and even a father figure to look up to and affirm their isolated and often prejudiced worldview.

What does Jordan Peterson believe?

Understanding Peterson’s intellectual and cultural project will also help you understand his popular YouTube videos a little better. For example, why does Peterson spend some much time talking about Disney movies? Famously, Peterson likes to tear into Frozen for being SJW propaganda. Remembering that Peterson is setting out to affirm a more “traditional” view of masculinity, free of the influence of things like Marxism, postmodernism, leftists, or what many people might call social progress, his anger makes complete sense.

While Peterson has a long list of the forces of modernity he is generally opposed to, writers like Shuja Haider of Viewpoints have pointed out that he declines to engage in direct criticism of the work of the various authors he critiques. Essentially, he rails against modernity without ever really bothering to define it. If he did, he would have to admit he is speaking of things like civil rights and gender equality. This is just one example of the kind of lack of intellectual rigor that led Maclean’s Tabetha Southey to call Peterson, “the stupid man’s smart person.”

Peterson is careful not to explicitly align himself with fascists. But it isn’t a giant intellectual leap from Peterson’s words to the actions in Charlottesville. How does one toughen up if not through violence? He says he is not of the alt-right, but he has said, “If men are pushed too hard to feminize, they will become more and more interested in harsh, fascist political ideology.”

Where does Peterson’s ideology begin?

Peterson tries to duck out of taking responsibility for the political actions of his followers. One of his 12 Rules is “Set your house in perfect order before you criticize the world.” But everything is especially political when you are positioning yourself as a cultural theorist. As the world develops around us, we are impacted every day by the world’s political realities. We pay rent on that house we have to put in order.

Nathan J. Robinson is the author of perhaps the most thorough dismantling of Peterson’s intellectual credibility so far. As he concludes his argument, he makes exactly this point:

“Peterson speaks to disaffected millennial men, validating their prejudices about feminists and serving as a surrogate father figure. Yet he’s offering them terrible advice, because the ‘individual responsibility’ ethic makes one feel like a failure for failing… Millennials struggle in part because of a viciously competitive economy that is crushing them with debt and a lack of opportunity…But if you can’t pay your student loans, or your rent, and you can’t get a better job, what use is it to tell you that you should adopt a confident lobster-posture?”

Here Robinson refers to an anecdote in 12 Rules in which Peterson explains that human males, like lobsters, are subject to a rigid hierarchy of dominator and dominated. While he is welcome to indulge in whatever metaphors he likes, the sad view dominates his work. He may sound smarter than your average fascist, but his words are little more than furious, insignificant bluster.

The only thing you can really learn from Jordan Peterson is that while being a conservative academic might be lucrative, it certainly isn’t worth it.