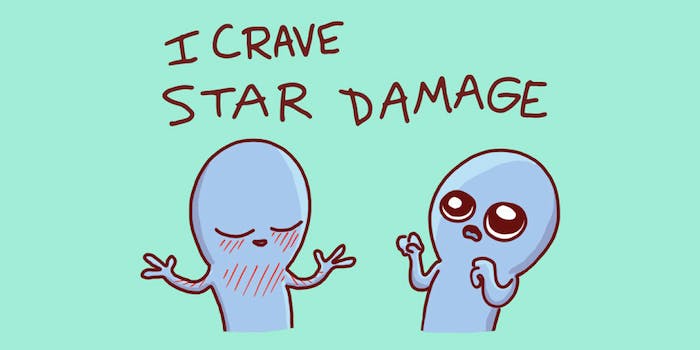 Some fans say it's that age-old 'artist vs. art' argument.

As far as milkshake ducking goes, Nathan Pyle’s Strange Planet series isn’t the fastest something beloved on the internet has fallen. The artist’s webcomic depicting human rituals through plain-spoken aliens managed to go almost two months before controversy struck. A recently resurfaced 2017 tweet of Pyle’s, in which he appeared to express support for the anti-abortion organization March for Life, has since turned the comic’s comments section on Instagram—which has nearly 2 million followers—into a cacophony of people demanding an explanation and former fans expressing disappointment. There’s also a lot of “PRO CHOICE” comments.

Pyle posted a response to the backlash on Twitter Tuesday, writing that he and his wife “have private beliefs as they pertain to our Christian fate.” As some fans pointed out after his 2017 tweet went viral on Monday, every social media bio he has includes the line “I follow Jesus.” Regardless of their religious beliefs, Pyle continues, both he and his wife disapprove of the current GOP, a party whose politicians routinely reference faith as a key motivator for their legislative decisions.

Pyle’s response, however, fails to answer fans’ questions about his current views on abortion. One comment perfectly sums up fans response to the non-answer: “So are you pro life or naa?”

Pyle publicly commented on his religion and political views after being scorched by Twitter users. Several people created memes using the very comics that brought the artist international attention in the first place to mock him.

But while some (now probably former) fans have been vocal about their newfound disdain for Strange Planet, several say they separate the art from the artist.

“While I may not agree with his viewpoint on it, the Strange Planet [comics] do not have any agenda with that viewpoint and as such, I don’t think the two need to necessarily be linked together,” Twitter user and Strange Planet fan Brian, who goes by @Taffy_Samurai on Twitter, told the Daily Dot.

“It is certainly disappointing to find out that his views don’t align with my own on an issue that I feel is important … though I really think it’s inconsequential to his work as he isn’t really a political figure nor does his work represent any political opinions,” said Twitter user @melsassburg, a fan who has been following Pyle’s work for years.

Another fan, Mary Blunt, @BoogerRambo, seemed similarly unphased by the backlash. She previously posted about her desire to get a Strange Planet tattoo, and Pyle’s beliefs on abortion didn’t influence her love for the “really adorable” aliens.

Others are holding out hope that given the tweet’s age, Pyle’s views might have changed over the last few years. His latest statement’s ambiguity on the issue failed to clarify his stance.

“Maybe he just needs some education that can help him understand that you can be personally against abortion and pro-choice at the same time,” said Twitter user Monica, @Monica952. “I’m still going to enjoy his comics, I’ll just be a little bit sad that personal opinions have clouded my enjoyment.”

Ironically, the innocuous nature of Strange Planet’s humor attracted many fans to the comic in the first place, according to a few people the Daily Dot spoke with. Most punchlines come from realizing the inherent weirdness of the human experience, regardless of political party or belief. Since the comic’s inception in February, its ubiquitous humor has attracted fans from all reaches of the internet. That could be why so many fans we spoke to originally saw the comic on Facebook of all places—usually the last rung of meme circulation.

Pyle’s previous work also built on finding the laughs hidden in everyday observations like Strange Planet does. Some of his previous viral projects include a series of GIFs depicting New York City etiquette (which became a book) and captioning the adventures of pigeons on the city streets. Strange Planet’s inspiration came from a similarly mundane moment, according to the comic’s Patreon page: when his wife hid their toaster in a closet before guests visited their home.

While the future of Strange Planet remains unclear, Pyle has been posting updates throughout the Twitter fire over the last 24 hours. Several other artists and fans posted their support for his work on his Twitter statement.

Sorry that people subjected you to this, man. ❤️ It's absolutely nuts.

Also, you don't owe the dogpilers anything, and you don't have to prove anything to them.

Love and respect you and your art, regardless of what your personal/political beliefs! I'm so ashamed of the people who put you in such uncomfortable situation and pressured you to make a statement on such a personal subject. Wishing you the best.

Just a guess, but given the comic’s prevalence among baby boomers on Facebook—a demographic that trends toward right politically—Strange Planet will likely weather this controversy just fine.