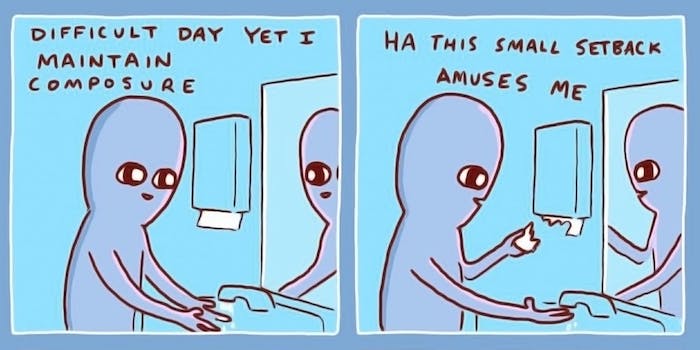 The creator of an immensely popular alien comic, Strange Planet, came under fire on Monday for an old tweet in which he appeared to show support for the pro-life organization March for Life. Pfter fans invaded his social channels, demanding to know where he stood on abortion, Nathan Pyle finally responded in a tweet on Tuesday. Sort of.

“My wife Taylor and I have private beliefs as they pertain to our Christian faith,” Pyle said in a statement posted to his personal Twitter account. “We also believe separation of church and state is crucial to our nation flourishing. Our votes go toward the Democratic Party.”

“Additionally, we are troubled by what the Republican Party has become and do not want to be associated with it,” he said.

Pyle didn’t respond to the Daily Dot’s multiple requests for comment on the tweet. His vague statement doesn’t clear up his views on abortion. By saying he has private beliefs, perhaps he is saying that he doesn’t believe in abortion personally yet doesn’t want to project his personal views onto others across the country.

The replies on Pyle’s tweet included several supportive comments from fans. But others said they disappointed to hear about his beliefs on abortion.

Yeah if your conception of Christian faith includes "not supporting reproductive rights" I'm out. To think that someone whose better known creation is a comic called "Strange Planet" wouldn't understand the necessity of questioning his own beliefs is… more than disappointing.

Hopefully you can understand why people would quite like a clarifying statement. We’re creators of content on a very public platform & people want to know whether they’re supporting & buying things from someone who believes in the limiting of women’s reproductive rights.

Whether Pyle’s beliefs will affect his readership is yet to be seen. Right now, it doesn’t look like it. As of Monday morning, his Instagram following had increased from 1.5 million to 1.8 million.