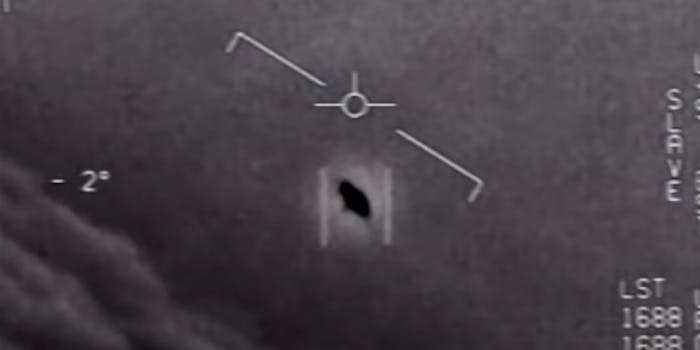 The Pentagon released three declassified videos that appear to show U.S. Navy pilots coming across disc-shaped, flying objects, and now everyone on Twitter is talking about aliens.

The U.S. Department of Defense (DOD) released videos, between the years of 2004 and 2015, of “unexplained aerial phenomena” on Monday. The videos caused the phrase “aliens exist” to trend on Twitter.

One of the videos shows the flying object as someone repeatedly asks, “What is that?” All of the videos included comments from shocked Navy pilots.

People on Twitter mused that the timing is a little suspect.

“The government said f•ck it let them know aliens exist we might not be here next year,” Twitter user @Eljuliancreed wrote.

Others said they weren’t surprised to see the video, considering the start to the year that we’ve had.

Many made memes about aliens arriving to the U.S. during the pandemic.

However, at least one person took the videos seriously. Former Sen. Harry Reid (D-Nev.) tweeted about the newly released videos.

“I’m glad the Pentagon is finally releasing the footage, but it only scratches the surface of research and material available,” Reid wrote. “The U.S. needs to take a serious, scientific look at this and any potential national security implications. The American people deserve to be informed.”

Although news outlets had previously leaked the videos, it’s the first time the Pentagon is authorizing the release of the videos.

“When we all knew that aliens exist but then the U.S. govt confirms it with receipts,” Twitter user @_wreckiniall wrote.