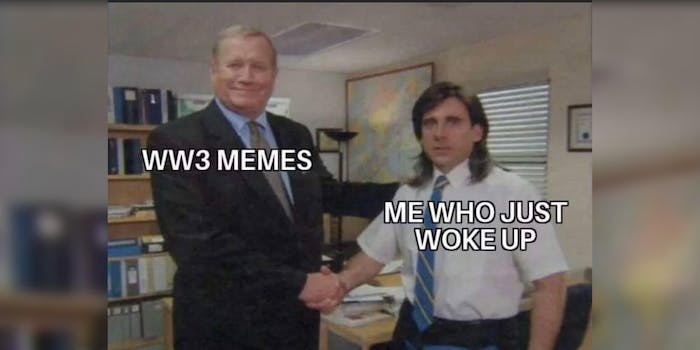 Not everyone is laughing.

Concern over a theoretical World War 3 is high, and people are expressing their anxiety through memes.

Following a drone strike carried out by the United States that killed two prominent Iranian officials, many Americans are concerned. People took to Twitter to share their thoughts on the matter and quickly turned to memes to communicate their feelings. Unsurprisingly, the waves of WWIII memes now sweeping the web are not sitting well with everyone.

Me: This decade I'm gonna get married, have kids, buy my first car, travel the worl-#WWIII: pic.twitter.com/rHKC8Bacct

Most of the memes poked fun at fear of getting drafted. Many draft-aged users are expressing their fear of the draft through funny, but ominous, posts. “Me after I fake my death to avoid getting drafted,” one user captioned a video.

Me after I fake my death to avoid getting drafted #WWIII pic.twitter.com/kZK6Skqkq3

Me chilling at home after ignoring my draft notice #WWIII pic.twitter.com/fMRtvRg3ZV

Other memes centered around millennials and Gen-Z joking about their general lack of preparedness for war.

Me and the boys on missile duty during #WWIII pic.twitter.com/pdfh29eT9n

Me and my boys when we in Iran and run out of ammo and have to make our own redneck shit #WWIII pic.twitter.com/t7Qeb32SKD

As the WWIII memes picked up speed online, they were met by a swift and fierce backlash. Disapproving users chided memers for their nonchalance, and for using memes as a “coping” mechanism. “Stop saying ur making memes about war as a ‘coping’ method,” one user wrote. “Every single one of u will be fine the people of iraq and iran will continue to suffer u people have nothing to be fucking coping for.”

also, all world war 3 jokes are inappropriate. this war will not be fought on us soil. you will not be affected. this is not about american lives.

“War is not a fucking joke,” another user wrote. “It is a destructive and selfish act. 4,424 U.S. soldiers and an estimated 600K Iraqi civilians died in the Iraq war over WMDs that did not exist. So please stop with these #WWIII memes and instead call your Congress members and tell them #NoWarWithIran.”

americans joking about commiting more imperialism and genocide in another country and saying 'it's a coping mechanism' is peak 2020 and we're literally only two days into this year https://t.co/Lf0XgkUtnD

Accusations that Black users, in particular, were at the center of the influx of memes suddenly shifted the focus for critics. Some started going after Twitter users of color, heaping criticism on their tweets for not taking the situation seriously. “Honestly, I’m not believing a lot of you right now when you say that war is not funny,” one user shot back at critics. “Twitter is such a performative space, I find it likely that many of you are declaring how unfunny Black Twitter is just for some retweets. All of it is pretty disgusting at this point.”

Honestly, I’m not believing a lot of you right now when you say that war is not funny. Twitter is such a performative space, I find it likely that many of you are declaring how unfunny Black Twitter is just for some retweets. All of it is pretty disgusting at this point.

I know how this space works. We all do in fact. Literally combing over other folks tweets to see how well you can chastise and “educate” folk about war, to get more likes and retweets. The jokes are pathetic and so are some of you.

A lot of Black liberals are so used to playing the oppression olympics that they now want to equate Black folks experience here with that of folks in the global south, living under the bullseye of the worlds most lethal military. Pls don’t do this.

Black Twitter, meanwhile, remained entirely unfazed by the criticism. “All of black twitter chillin in jail when we refuse to go to war,” one user wrote.

“we really shouldn’t joke about the war-“
black twitter: pic.twitter.com/3N00VP6AMt

“We goin to war soon”

As of press time, the memes show no sign of slowing down.