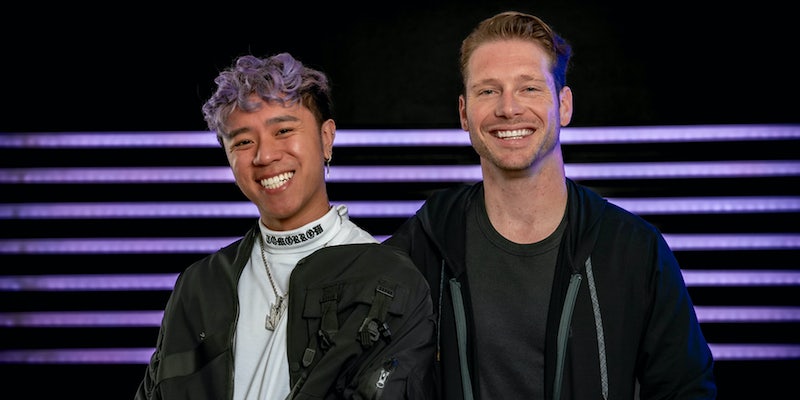 ‘For any influencer that wants to be a part of it, I think they need to educate themselves first before doing anything because it’s a very unregulated space.’

We’re reaching out to creators to explore the good and the bad of new trends and unexplored territories. This week, we’re discussing the divisive Web3 world—aka, the world of blockchain-based technologies—with TikTok star Michael Le, who recently co-founded a crypto-based, “play-to-earn” gaming organization and NFT-asset lending platform alongside CEO and serial technology entrepreneur Robin DeFay.

Web3 can be confusing, controversial, and volatile, so many creators choose to avoid it altogether. Some have adopted a staunchly anti-crypto stance; others are skeptical, but interested; and others wholeheartedly believe blockchain technology will allow them to have greater ownership over their digital creations.

One such Web3 evangelist is TikTok star Michael Le, who recently announced he is co-founding a new crypto-based gaming organization called Joystick, which intends to lend players NFT assets for varying monthly fees. Le (@justmaiko) is a TikToker with over 51.4 million followers who blew up for his dancing and choreography videos. In 2020, Le was listed by TikTok as one of the top 10 biggest break-out stars of the year—alongside influencers like Charli D’Amelio, Addison Rae, Bella Poarch, and Noah Beck.

Le was ahead of the TikTok curve, joining the app and rising to fame during its early Musical.ly days, and quickly became one of the app’s top earners. Le told Passionfruit in an interview he considers his early arrival to Musical.ly to be the reason for his internet fame. But despite Le’s rapid climb to virtual stardom, he said he quickly became disillusioned with what he was doing on social media.

“I was entertaining and making cool videos, but it was the same thing over and over… The second I found out about Web3, it reignited a passion,” Le described. “I really saw something that was untapped potential, really. And I wanted to be one of the first movers, just how I was with TikTok.”

Le said he was inspired by Web3’s “financial opportunity” for creators, and after taking some time to learn about the space, he said he found a particular interest in “play-to-earn” gaming.

As opposed to games that use in-game currency to reward players—like those “coins” you use to buy extra mushrooms in Mario Party—play-to-earn games are based in cryptocurrency. The idea behind play-to-earn gaming is that if a game remains hyped up, the cryptocurrency or exclusive NFTs you collect while playing can be sold to other players and traded for real cash. Typically, players are asked to buy into play-to-earn games by purchasing an NFT membership.

The model acts in opposition to traditional “pay-to-play” games, where the only rewards after purchase are entertainment and socializing. Publishers like Ubisoft and Epic Games have ventured into play-to-earn gaming, and blockchain games like Axie Infinity, the Sandbox, Gods Unchained, Splinterlands, Alien Worlds have already risen to popularity.

However, many gamers are opposed to play-to-earn gaming because of the blockchain’s environmental impact, unregulated speculation in the crypto market, and the financial barriers presented by game buy-ins.

People are also skeptical of the “scholarship” system found in play-to-earn games like Axie Infinity. The game typically requires users to buy a team of three NFT “Axies” to join, and some Reddit users say a “decent” Axie will cost a player upwards of $300 each. Those who can’t afford Axies on their own (“scholars”) can borrow the NFTs from other players (“managers”), who will then receive a cut of the revenue that scholars generate in-game. This system often reduces the amount of money scholars can earn and can create an exploitative hierarchy system.

Because of the criticisms of-play-to-earn gaming, Ubisoft faced internet backlash and internal company disputes in December for its announcement of blockchain-based gaming. Additionally, the Daily Dot reported in March that approximately $625 million worth of cryptocurrency was stolen from Ronin Network, an Ethereum-linked sidechain used for Axie Infinity. The Ronin hack sparked doubt about the safety and reliability of blockchain-based gaming.

Still, optimists, like Le, see opportunities for gamers to monetize and turn their passions into full-fledged careers. Joystick aims to create a lending system that maximizes profits for players.

“In the long-term, the aspiration is to create an environment where owning gaming assets and other tokens is accessible and beneficial to a vast majority of the world,” Joystick says on its website.

Like other gaming guilds, Joystick will lend NFT assets—like weapons, land, and characters—to users to use in popular play-to-earn games for varying monthly fees. Renting fees range from $15 to upwards of thousands of dollars per month depending on the rarity and value of the borrowed NFT, a Joystick spokesperson explained.

For example, a user can rent a piece of Joystick-owned land in a game, create NFT skins using that land’s resources, and then sell them to keep 100% of the revenue. Joystick spokespeople said this differs from the traditional play-to-earn scholarship model, which makes players share about 30-50% of their revenue with asset owners.

Le said the organization also intends to create an esports community that provides educational resources, tournaments, NFTs, and “JOY” tokens. JOY tokens, which will be issued on the popular Ethereum blockchain system, will grant opportunities for things like exclusive Joystick merch, private communities, and gaming assets.

According to a Joystick press release, the start-up has already raised an $8 million seed round and is pursuing another $110 million in a Series A round. On its website, Joystick says it already owns assets in top play-to-earn games like Axie Infinity, the Sandbox, Defi Kingdoms, and others.

Le said he recommends influencers interested in Web3 learn about it through Twitter and YouTube, and recently started his own YouTube account called JustMeta, where he explains Web3 terminology, how to get started in the Web3 world, and how to “avoid scams.” Le also thinks most influencers don’t understand projects they promote, and just see it as a quick paycheck.

“To learn about the space and everything, it’s like you’re getting into the wild west,” Le described. “For any influencer that wants to be a part of it, I think they need to educate themselves first before doing anything because it’s a very unregulated space.”

Countless creators have promoted cryptocurrency and NFT projects over the past couple of years. It’s a risky business, and some famous influencers, including Jake Paul and Kim Kardashian, are facing class action lawsuits after being accused of recklessly attracting their followers to “rug pull” or “pump and dump” crypto projects. These schemes often make promises of huge investment returns or exclusive community perks, and use celebrity endorsements to hype up and inflate a project’s value, only for the project’s founders to sell their shares and disappear after making millions of dollars.

Le said he understands why people might be weary of rug pulls or skeptical of blockchain-based games. However, he urged people to take a look at his team, who he says is experienced and knowledgeable in blockchain technology and entrepreneurship. He believes their experience lends credibility to the project.

Le said the team includes 13 people with experience in the tech world who will serve on Joystick’s advisory board and leadership team. The team includes blockchain engineer and chief technology officer Paul Jin; and CEO Robin DeFay who has allegedly founded start-ups in blockchain, internet, and music tech.

In an interview with Passionfruit, DeFay said despite Web3’s risky reputation, he hopes his professional background will ease worries that the Joystick project is illegitimate.

However, DeFay said he thinks Web3 will improve over time and is beginning to enhance the gaming experience.

“At the end of the day, as the whole space gets more and more developed and more and more involved, there will be more and more checks and balances in place and everything will be much more safe and much more user friendly,” DeFay said. “It’s this new layer to the gaming experience that’s going to provide a whole new level of realism.”

DeFay praised Le for being well-connected in the Web3 world, and pointed out he has been making Web3 content for over a year. He said his “large, loyal, and dedicated following” makes him a good fit for the project.

Le encourages creators to get involved with Web3 if they’re interested, but also said the most important thing for a creator’s success is to be ahead on the next big thing—whatever that may be.

“Always stay evolving, always look for what’s next. You know. I think competition is just going to get harder as time goes on. And the people who really have an opportunity are the people that look for the new things, the first movers. It’s a first movers market,” Le described.

Do you have a strong opinion about Web3? Email [email protected] for a chance to get featured in an upcoming newsletter.