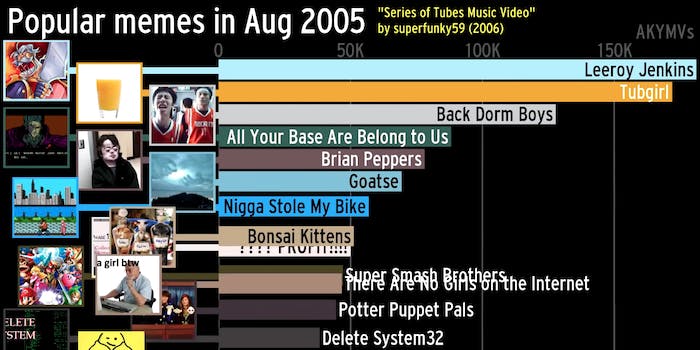 This video captures 15 years of meme trends in 10 minutes

From Leroy Jenkins to Big Chungus, the gang's all here.

It’s hard to believe that meme culture has been around long enough to get nostalgic. But a new YouTube video, which showcases the top memes from 2004-2019, will have you feeling all warm and fuzzy about things like Good Guy Greg and dat boi.

The video was created by Cary Huang, a senior majoring in computer science at Stanford University. It combines data from Google Trends and Know Your Meme to create a constantly shifting animated bar graph showing memes falling and rising in popularity. Some memes will have a meteoric rise and fall, while others stick around for months on end, occasionally falling a few spots only to surge back up to the top. It’s fascinating and almost hypnotic to watch as things like All Your Base Are Belong to Us give way to Leroy Jenkins and O RLY? Which in turn give way to newer memes until we arrive at more modern memes like Mocking Spongebob and Big Chungus.

(If you want to know more about how exactly Huang complied the data, he outlines that in a separate video on one of his other channels.)

In addition to showing you the memes and their popularity, Huang also included a soundtrack featuring some of the greatest meme songs and songs about memes to ever grace the internet. The soundtrack includes “Nyan Cat the Movie” from 2011, “Series of Tubes” from 2006, and of course Chocolate Rain.

“I think the idea of making a video about meme data has been in the back of my head ever since I first heard people refer to ‘dead memes’ in 2011,” Huang told the Daily Dot via e-mail. “I wondered to myself, what makes a meme ‘dead’? How quickly do memes go from alive to dead, and what factors go into a meme surviving the long haul (Lenny Face) or being a flash in the pan (Harlem Shake)?”

This isn’t the first data animation video that Huang put together. You can check out some of his other projects like his data bubble video showing the most popular YouTube channels or The most popular baby names by state. (Tip: if you’re writing a novel set in 1965, it should probably include at least one character named Lisa.)

“My twin brother and I have been making animations/random videos for YouTube since 2008,” Huang said, “but we didn’t feel like there was a place we could upload data visualization videos, which had less personality and were perhaps more serious than what we’d done before. So, around summer 2014, we created the new channel but didn’t know what to call it. ‘A-B-A-C-A-B-A…’ is a mathematical fractal pattern that shows up a lot in nature, music, geometry, and it goes on forever. We thought that made it a fitting name for this new channel!”

Huang added that he’s been making the videos on his own since around 2016.

“A lot surprised me about the data [of the meme video],” he told us. “I think I was subtly annoyed by how many shock sites were at the top of the leaderboard pre-2010, like Tubgirl, Goatse, 2 Girls 1 Cup, and Mr. Hands. I felt old internet let me down.”

Although he admitted it was hard for him to pick a favorite, Huang said he prefers his memes a little more light-hearted. “I do like Doge and its silly comic sans text,” he said, “It’s cute and carefree, and it doesn’t have any controversial histories like Loss or Harambe the Gorilla!”

If you find these kinds of videos interesting, Huang wants you to know he’s open to suggestions for new topics. And if you want to take a wack at creating one, he thinks you should go for it.

“Just know that I’m always open to suggestions about what other data visualizations I should make,” he said. “And, if anybody out there wants to start their own data-vis channel, go ahead! There are so many more popping up now (like TheRankings, WawamuStats, and Statistico) and it’s cool to see how each one presents data differently.”

It would be great for more people to get into data visualization, and we certainly hope Huang keeps it up as well. Videos like this are what make the often cynical and bleak internet a fun place.