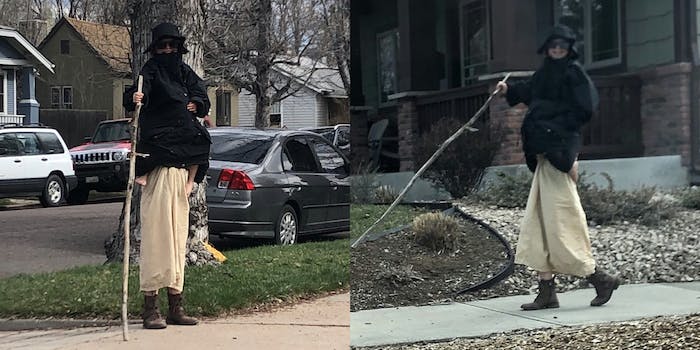 The two (or sometimes three) kids in a trenchcoat meme has been around for a while. It’s been in countless cartoons and comic strips, and every now and again, it’s gloriously spotted in the wild.

Twitter user @Roysenotes recently shared some pictures of what is either a very tall adult with a small face, or one kid on another’s shoulders.

my sister saw two unaccompanied little children in a trench coat giggling amongst themselves yesterday and i am absolutely howling pic.twitter.com/Q3emyEDxgN

Seeing the meme in real life delighted people on Twitter, many of whom chose to play along with the gag.

Bare feet? I only see a 2nd pair of arms

Would a normal adult have two extra feet dangling at the end of their black shirt?

Several people also dropped in their favorite version of the trope. This included multiple references to Vincent Adultman, a character(s?) from BoJack Horseman who briefly dated Princess Caroline.

Seriously? No one here to comment with this one? pic.twitter.com/B35FdWuFqA

Did they try to get a loan? pic.twitter.com/P9Z7dxC6WW

This isn’t the only real-life version of the kids in a trenchcoat meme to make a splash online. Last year, a couple of kids tried pulling the trick to get into the PG-13 rated film Black Panther.

We tried getting the two for one special at black panther. The manager was not having it. pic.twitter.com/Ktqsuh7s3m

Apparently, they were trying to capitalize on the theaters two-for-one special and get a third friend in for free. Unfortunately, the guy working the ticket booth was not buying it.

In fact, this trick has probably worked zero times in history, but if you’re a couple of kids and you really wanna see some R-rated movie, by all means, give it a shot. Who knows, you just might be the first to pull it off.