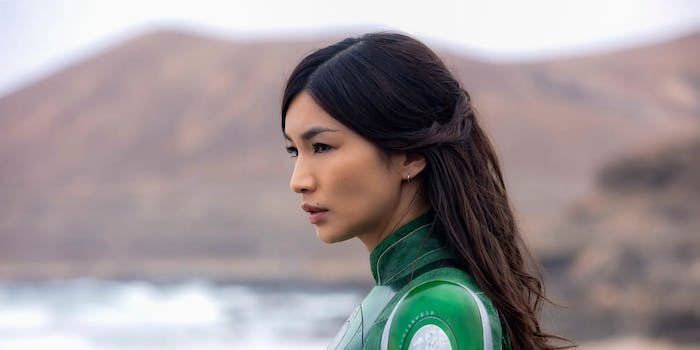 Marvel’s overstuffed ‘Eternals’ bites off more than it can chew

This new MCU spinoff offers an ambitious concept, but falters due to a clumsy script and far too many characters.

As someone who wants the MCU to explore new territory, it brings me no joy to say that Eternals is dull. Spanning 7,000 years, it’s a fantasy tale about a team of immortal aliens who watch over Earth like intergalactic park wardens. Echoing Wonder Woman‘s Amazon society, they vow not to interfere in human conflicts. But this moral dilemma stretches credulity to breaking point. Not only did the Eternals refuse to help when Thanos killed half the population (a detail that must be tackled with some laborious plothole-darning), their lifespan means they stood by and watched millennia of war, genocide, and slavery. Okey-dokey!

RELEASE DATE: Nov. 5, 2021
DIRECTOR: Chloé Zhao
RELEASE: Theatrical
Starring a team of immortal heroes, this epic sci-fi/fantasy film spans 7,000 years of human history, offering a very different scope to typical MCU fare. However, the story is bloated and underdeveloped, featuring too many characters and too clumsy a plot.

Rather than embracing the idea of the Eternals being truly distant and inhuman, the film still wants them to be likeable and moral. Definitely a stretch because their personalities are half-baked, and much of the film’s dialogue is distractingly stilted. At a rough estimate, 70% of the Eternals script is exposition. The first act involves numerous clunky scenes where people explain their names, powers, and backstories as if they’re reciting their own Wiki summaries. “Well, it is tricky to introduce this many characters,” I thought charitably, before remembering that the first X-Men movie managed this with charm and ease—and was a full hour shorter.

Directed by Oscar-winner Chloé Zhao (Nomadland), who co-wrote the screenplay with Patrick Burleigh, Ryan Firpo, and Kaz Firpo, Eternals does have a different tone to most MCU products. It’s aiming for epic fantasy, portraying its heroes as godlike figures—somewhat similar to Zack Snyder’s vision for Justice League. Gemma Chan leads the ensemble cast as Sersi, unfortunately, she’s the least interesting Eternal. Her one defining trait is her affection and sympathy for humankind. The secondary lead Ikaris (Richard Madden) suffers from a similar lack of personality. His main schtick is that he’s very powerful and Very Serious. He’s also Sersi’s ex-lover, but despite sharing the MCU’s first sex scene, they have minimal chemistry. Happily, the other Eternals are more engaging.

Kingo (Kumail Nanjiani) is the comic relief, an egomaniac who uses his immortal talents to become a Bollywood superstar. He’s fun! Sprite (Lia McHugh) is cursed to look like a child forever, which sucks for her. Makkari (Lauren Ridloff) is a Deaf hero who speaks ASL, and while she doesn’t get a major role, she’s pretty charming. Barry Keoghan (always great!) plays the cynical psychic Druig, with Salma Hayek as the team leader Ajak. Phastos (Brian Tyree Henry) is by far the most relatable and emotionally dynamic, playing the MCU’s long-awaited First Gay Superhero. (Regrettably, he also stars in the film’s most cringeworthy moment, blaming himself for the Hiroshima bomb.)

Finally, we have Don Lee and Angelina Jolie as Gilgamesh and Thena, the film’s most compelling relationship. They’re warriors and life partners, with Thena as a troubled veteran and Gilgamesh as her supportive friend. Their story offers a more impactful sense of epic, centuries-old love than Ikaris and Sersi’s unconvincing romance. Jolie’s star power shines through during her somewhat limited screentime, and on a purely shallow level, it’s cool to watch her stab monsters with a magical spear.

Eternals is, in fact, something of a monster movie. The heroes’ mission is to protect Earth from a bunch of alien predators, the Deviants. A potentially interesting departure from the MCU formula of prioritizing a singular supervillain. Unfortunately, neither Marvel nor Chloé Zhao is very good at creating effective monsters. The Deviants look ugly, and not in a good way. Their design is overcomplicated and unmemorable, with a sheen of CGI unreality. They lack the physicality of a true monster-movie monster, where Jurassic Park lingers on the dripping gleam of fangs, or Godzilla revels in the destructive heft of its antagonist. It’s impossible to find the Deviants scary or cool, making it hard to care about the fights scenes, where the heroes zap them with laserbeams or bloodlessly chop them to pieces. In fairness, though, many MCU films have forgettable fight scenes. Eternals is more concerned with the moral dilemmas of its main cast. Which also aren’t very interesting.

Each Marvel movie arrives on a tide of hype, and this one focused on how Eternals will be “different” – both in terms of Zhao’s artistry, and the fantastical scope of the story. Producer Kevin Feige made a lot of noise about Zhao’s use of natural light and location filming, but I found Zhao’s subdued palette and diffuse lighting to be a bad fit for a fantasy/action blockbuster. Eternals actually repeats a recurring aesthetic problem for the MCU. Shot by the same cinematographer (Ben Davis) as Avengers: Age of Ultron and Captain Marvel, the film is frequently murky and flat during scenes that combine CGI with live-action. The most visually interesting moments come when the concept designers take over for primarily-CGI sequences, especially the scenes involving the Celestial god Arishem.

For much of their 7,000-year stay on Earth, the Eternals are motivated by loyalty to Arishem. This offers an intriguing religious angle to the story, but the team’s philosophical differences remain frustratingly shallow. Bafflingly, the film also fails to draw comparisons between the heroes’ relationship to Arishem, and the way the Eternals themselves are viewed as gods for much of human history. Somehow there’s less conflict between Sersi and her bland human boyfriend (Kit Harington) than between Peter Parker and MJ in Spider-Man. Another symptom of there being far too many characters.

In some ways, I admire what Eternals is going for. It’s a weirder and more ambitious concept than most MCU movies, and it offers a truly diverse cast. However, it falls flat on several fronts, beginning with its attempt to introduce ten superheroes at once. The best I can say is that it’s bad in a more interesting way than something like Doctor Strange, which felt like the paint-by-numbers version of a Marvel origin story. You get the sense that Zhao wanted to make something intimate and philosophical yet epic in scope, but got tripped up by the creative restrictions of working on a Disney blockbuster.

Eternals is out in theaters on Nov. 5.