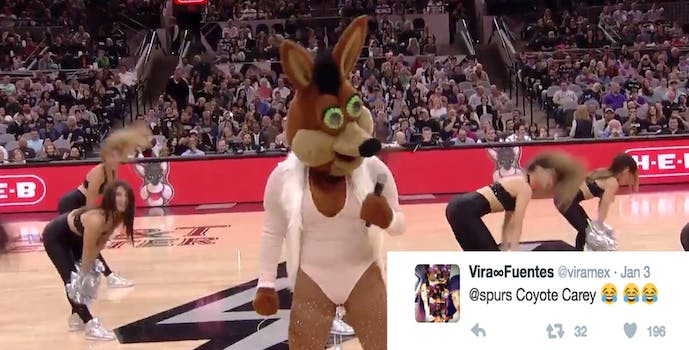 Just when you thought the world had finally moved on from Mariah Carey’s massive New Year’s Eve fail, an NBA mascot delivered the best burn to date.

While there may be a perfectly reasonable explanation for the pop diva’s mic troubles during the performance, the event was seen by many as a fitting end to an altogether disastrous year, and the ensuing blame game has kept the event in the news cycle way past its natural expiration date.

During the halftime of the San Antonio Spurs and Toronto Raptors game, the Coyote—one of the NBA’s most endearing mascots, what with his floppy ears and relentless dedication to “Go Spurs Go” chants—donned a leotard to recreate Carey’s breakdown. It’s brutal.

The Spurs aren’t the first basketball team to take a shot at Carey. The Indiana Pacers’ “Lip Sync Cam” got the first jab in, but here’s hoping the Coyote got the last laugh.