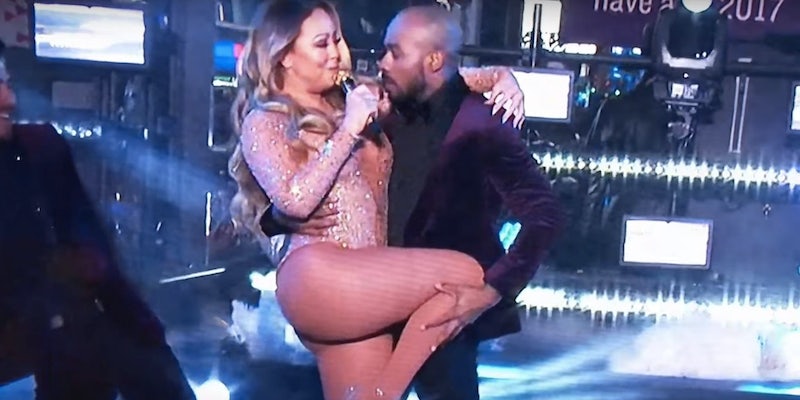 Mariah Carey's NYE show was a mess, but there's a logical explanation

It’s pretty safe to say Mariah Carey’s New Year’s Eve performance was an unmitigated disaster. But before you launch a thousand memes in her general direction on Twitter, it’s important to consider why it happened—and it’s distinctly possible we shouldn’t chalk it up to a very public DGAF moment.

Redditor Ireallywantto pointed out in a thread this morning that some very fundamental physics might have been at play: Carey’s management has confirmed that her in-ear monitors weren’t working before she took the stage, and without her monitors in place to keep her on track with the … er, track, Carey might’ve faced an involuntary speech jam.

In 2012, Japanese researchers Kazutaka Kurihara and Koji Tsukada won the Ig Nobel prize in acoustics for inventing a speech jammer gun. The device records incoming audio and then plays it back at a very slight delay (like, a couple hundred milliseconds), rendering the speaker unable to continue—at least not intelligibly. If you’ve ever been on a conference call with an echo, you’ll understand the infuriating feeling immediately.

The science behind it is simple: When you speak, your brain processes the auditory feedback immediately through your ears; if that feedback is delayed, your brain’s cognitive processes are thrown out of whack, making it almost impossible to continue.

Here’s one example of a speech jammer in action:

Incidentally, delayed auditory feedback is the root cause of stuttering, so people with a natural stutter are in fact helped by the speech jammer rather than hindered by it. (It’s like two wrongs making a right.)

So what does this all have to do with Mariah Carey?

Simple: If the monitors in her ears that were intended to act as the brain’s immediate auditory feedback weren’t working (whether because they were malfunctioning or on the wrong frequency), she would be left only to hear the song’s backing track through the speakers in the crowd. Given their distance from the stage, there would have been a slight delay in that audio coming out of the speakers and traveling back to her ears, functionally acting as a massive speech jammer.

That, or 2016 just couldn’t help but get in one last punch against another famous musician.