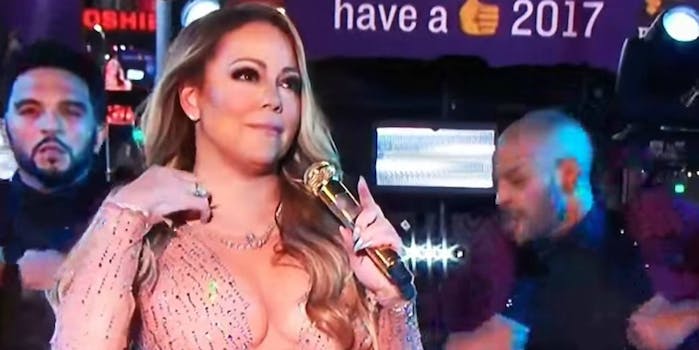 Mariah Carey’s New Year’s Eve performance was a disaster, and Twitter loved it

Nobody is having a worse 2017 than Mariah Carey. But after fouling up her New Year’s Eve performance in front of millions on Dick Clark’s New Year’s Rockin’ Eve,  the singer basically said, “Eh, what are you gonna do?

Hey, don’t mind her. She just needs help walking down the stairs as her backing track begins, and hell, she’s just going to stand on the middle of the stage, not doing anything while her voice fills Times Square and her backup dancers go about their jobs like the solid entertainers they are. She even tells the audience at one point that she’s being a good sport, which is pretty much the opposite of what a good sport in that situation would say.

Eventually, she’s like, “Fuck it, I’m going to let the audience have a turn at the mic.”

Even though she apparently couldn’t hear the song through the monitors—reportedly, the wrong song also played—Twitter predictably roasted her.

Woke up to Mariah Carey trending and expected the worse … Relieved to see her NYE performance was the last thing to die in 2016 pic.twitter.com/iQ9Ca8sG0S

Even Milli Vanilli is embarrassed by Mariah Carey's debacle. pic.twitter.com/8179cHu7jA

But that didn’t stop the diva. Here was her response to the disastrous performance.

Nice recovery by Carey there. Either way, the entire spectacle was, in Carey’s words, “Uh-mazing.”