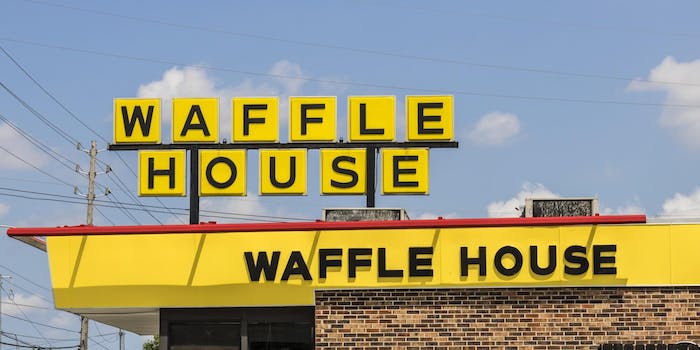 'Every guy has a Waffle House Cook in his life.'

A Reddit story of a man who can’t seem to stop fighting with a Waffle House cook has gone viral—and people love it.

It all started when a woman’s breakfast-loving 29-year-old boyfriend ordered eggs at a Waffle House. He likes his eggs hard; they came to him runny. He complained, and the cook sent him scrambled eggs in response. So he complained again. This time, the cook served him two hardboiled eggs.

“I think it was just part of the cook’s schtick,” the woman wrote on Reddit, detailing the now-iconic feud.

They left the Waffle House, and her boyfriend was in a bad mood but didn’t talk about it, she said. The following week, he wanted to go to Waffle House again.

The same cook served his eggs wrong again, so her boyfriend “sort of snapped at him,” said he “wasn’t interested in messing around, and just wanted the correct eggs.” In response, the cook served him “a piece of toast with a hole cut out in the middle with a fried egg in it.”

So, her now-“mad” boyfriend threw the “egg toast” at him, leading the cook to throw it back.

“They ended up sort of wrestling/fighting until my BF was like ‘this is bullshit’ and walked out. Nobody got hurt, but the few other people in there were watching and laughing a bit,” she said.

But it doesn’t end there. Her boyfriend continued to go back to that same Waffle House location, where his nemesis works. Every time he goes back, he orders eggs, the cook “serves him some other version of eggs, and they end up beating “the shit out of each other.”

“It’s almost a ritual at this point,” she wrote. “They’re like Peter and the giant chicken from Family Guy.”

She doesn’t even go with him anymore, but he continues to go by himself, physically fighting with the cook six or seven times.

“I’ve tried to talk to him a few times but he keeps saying it’s a matter of principle,” she wrote.

Needless to say, people online are eating the content up, with one calling it “an absolute Hall of Famer.”

“It is Good and Right to have a nemesis and I am proud of this man and this Waffle House cook for keeping the spirit of honorable combat alive,” Twitter user @IwriteOK wrote.

Some simply don’t believe the story is real.

But others, who have patronized a Waffle House, find it business as usual.