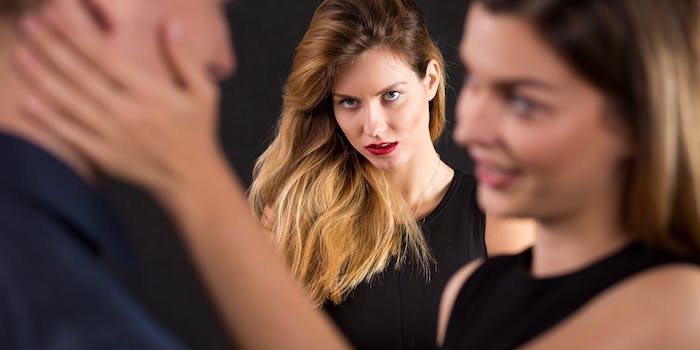 'He works with a shallow crowd, and he didn’t want to explain his wife’s weight gain to them.'

If you’re looking to tour the annals of depravity, then the Am I The Asshole subreddit is the place to be.

And one redditor has gone viral for being the worst-of-the-worst. In her post, she explains that she and her sister “look very much alike”—only she made sure to clarify that she’s younger. This is why her brother-in-law asked her to attend his work events with him after his wife, her sister, gained over 100 pounds (yeah, he’s an asshole too).

“He works with a shallow crowd, and he didn’t want to explain his wife’s weight gain to them,” she wrote.

She further explains that her sister got pregnant in October of 2019 and had a miscarriage nine weeks after finding out.

“So when my sister confronted me about going out with her husband I was honest with her. I told her that he was a little uncomfortable with her weight gain and didn’t want to set off rumors amongst his colleagues. I was just his plus one at the events and he was afraid to hurt her feelings,” the redditor wrote.

The redditor explains that this is not the first time she has “brought up her weight … and her (husband’s) growing discomfort with it” to the sister.

“Then she tried to make the excuse that she was pregnant and that was the reason behind her weight gain. I pointed out that she was barely pregnant and would probably have better luck if she lost a few. This started a whole firestorm of her complaining about me trying to steal her husband, blaming her for her miscarriage, etc,” the redditor wrote.

She later posted an edit to clarify that her sister “gained weight way before she had a miscarriage.”

She then asked the ready-to-roast redditors whether she was the asshole in this situation.

For the most part, the subreddit was horrified, declaring both the redditor and her sister’s husband the highest caliber of assholes.

“OP is an AH, but the husband is some level of AH I don’t know if I’d seen before. That she was willing to go along with it reeks of the husband wanting the younger, ‘hotter’ version of his wife and OP loving the extra attention,” one wrote.

Some couldn’t get past the “barely pregnant” statement, calling it unbelievably cruel.

“I’ve never heard such a horrible term for an early miscarriage,” one declared.

People are also pretty sure that OP and her sister’s husband are having an emotional affair if not a straight-up affair-affair.

Many feel for the sister and want her to remove herself from the “nightmare world” she seems to be living in.

“She honestly sounds like she deserves better than either of them. If she broke up with her husband and cut off her sister, I wouldn’t blame her,” one wrote.