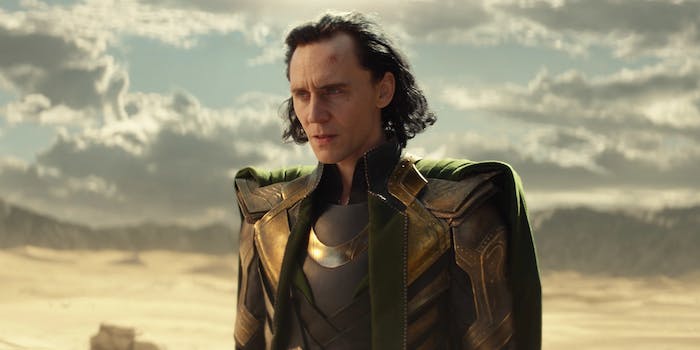 ‘Loki’ episode 4: Who are the characters in that mid-credits scene?

This scene introduced some intriguing callbacks to the comics.

Ever since Richard E. Grant was cast as an undisclosed character in Loki, fans have been wondering if he’d play an older version of Loki himself. Episode 4‘s mid-credits scenes confirmed the rumor, when Tom Hiddleston’s Loki was “pruned” from the Sacred Timeline and materialized in a new location with four other Loki variants. It’s an enticing teaser for episode 5. But who are these new Lokis?

Two of those variants will be immediately recognizable to comics fans: Kid Loki (Jack Veal) and Classic Loki (Richard E. Grant). Then we have Lizard Loki in Kid Loki’s lap (not a familiar figure, although Thor was a frog for a while), and English actor and playwright DeObia Oparei credited as “Boastful Loki.” Since Oparei is carrying a giant hammer, this suggests he comes from a timeline where Loki has a more Thor-like role—and is potentially deemed worthy of leading Asgard into battle, something that Hiddleston’s Loki never achieved.

As the MCU shifts into multiverse storytelling, these Loki variants represent an interesting opportunity for the franchise. In the comics, long-running characters evolve over time, sometimes changing drastically in personality and appearance. Loki‘s variant timelines give us a chance to introduce some other iterations of Loki from the comics, contrasting with the version Tom Hiddleston made famous onscreen. (In the upcoming Marvel/Disney+ series What If…?, we’ll see this idea explored at length with other Marvel A-listers.)

Judging by his costume, Richard E. Grant’s Classic Loki belongs to the earliest era of the Thor comics, back in the 1960s and ’70s. This was a period when costume choices were bright and cartoonish, and storylines were often absurd and/or fueled by wild twists. 1960s Loki was portrayed as a malevolent supervillain, sometimes looking visually older than Thor. Meanwhile, Kid Loki is a recent figure, arriving in a more emotionally complex era of superhero storytelling. His storyline began with Loki being split into two forms: “Ikol” (a magpie with the memories of the old, evil Loki) and Kid Loki, who starred in a longform coming-of-age narrative and allowed Loki to be reborn in a more sympathetic role. Over the past decade, Kid Loki has grown up into a young adult, an arc that saw him finally be acknowledged as queer and genderfluid in Marvel canon. The “Lizard Loki” in that mid-credits scene may actually be an alternate version of Ikol.

Richard E. Grant has a great capacity for both comedy and maliciousness, making him an ideal choice for Classic Loki. By contrast, you could make the argument that Hiddleston’s Loki envisions himself as a Classic Loki in the making, but is perpetually hampered by his own vulnerabilities. It should make for an interesting confrontation in episode 5.