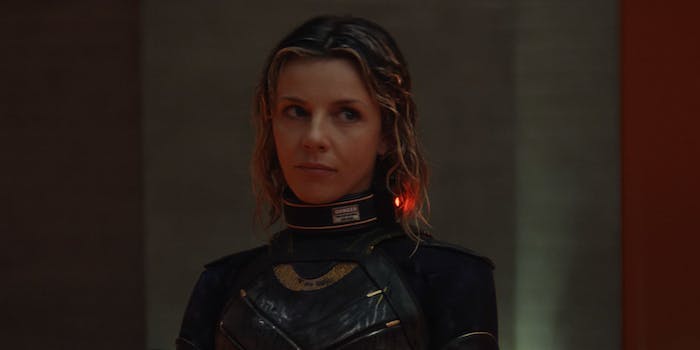 ‘Loki’ episode 4 is where the show really pays off

While episode 1‘s TVA interrogation scenes were mostly dedicated to exposition, episode 4 brings the emotional intensity we’ve been waiting for. After building up the relationships between Loki, Sylvie, and Mobius, this conflict is more than just a game of cat-and-mouse between time cops and time criminals. Loki and Sylvie have formed an unexpectedly sympathetic partnership, and as for Mobius… well, he’s starting to acquire some qualms about his role as a TVA company man.

Thanks to a flashback showing Sylvie being arrested by the TVA as a child, we learn that she has a history with TVA boss Ravonna Renslayer (Gugu Mbatha-Raw). To Ravonna, Sylvie is the one who got away. This doubles Ravonna’s determination to erase both Lokis on behalf of the Time-Keepers, a mission that’s further complicated by Mobius’ nascent doubts. Previously trapped on the soon-to-be-destroyed planet Lamentis, Loki and Sylvie are saved/arrested by the TVA in the nick of time. But once they return to headquarters, Mobius is only allowed to interrogate Loki—not Sylvie. He eventually discovers that this is because Sylvie is (in Ravonna’s eyes) dangerous to him. She’s a threat to his loyalty.

Last week, Sylvie told Loki about the TVA’s big secret: Every agent is actually a former variant. After removing their memories, the Time-Keepers brainwash them into being loyal servants of the Sacred Timeline. Unfortunately, Mobius’s role as an investigator makes him the perfect person to uncover this dangerous truth. At first, he interrogates Loki just like before, manipulating his way past Loki’s lies. To soften Loki up, Mobius locks him in a time-loop dungeon with an angry Lady Sif—a very welcome Asgardian cameo. But on his way into the loop, Loki warns Mobius that the TVA is lying to him, planting the first seeds of doubt. Hunter B-15 (Wunmi Mosaku) is going through a similar journey elsewhere, demanding that Sylvie unearth her hidden memories of her pre-TVA life. By the end of the episode, both Hunter B-15 and Mobius have been won over to Loki and Sylvie’s side, realizing that the TVA doesn’t really have their best interests at heart.

With only six episodes in the season, some of these arcs feel slightly rushed. Loki and Mobius have the kind of MCU relationship that thrives on good casting and a lot of emotional legwork from fans. The actual material is pretty shallow, but if you have a generous attitude, you should be invested enough for episode 4 to pay off.

This is the point where Loki and Mobius (a serial liar and his suspicious interrogator) choose to reach out and trust each other. A compelling turning-point for both characters, culminating in disaster. The episode’s final scenes see Mobius get “pruned” from the timeline by his own TVA co-workers, with Ravonna taking Loki and Sylvie to speak with the Time-Keepers. There, in a predictable but still entertaining twist, we discover that it’s all a ruse. The Time-Keepers are as fake as the Wizard of Oz, puppeteered by an unseen man behind the curtain. We end with Ravonna pruning Loki—a move that we previously assumed was a death sentence but turns out to mean something else. In a post-credits scene, Loki wakes up in a new location alongside three other Loki variants, one of whom is played by Richard E. Grant.

As I said last week, the MCU’s Loki is defined by three prevailing themes: villainhood, emotional vulnerability, and comedic mischief. Loki is disappointingly light on his mischeivous side, but episode 4 really digs into his loneliness. Is Loki a tragic, misunderstood figure? Not exactly. But he certainly thinks he is, and Tom Hiddleston sells that belief. We can enjoy Loki’s amoral hijinks while also feeling sympathy for his very transparent vulnerabilities. Separated from his family and his original timeline, Loki craves attention, friendship, and trust. Sylvie and Mobius both give that to him in different ways, and Loki hungrily accepts. In a way, this echoes Loki’s recent journeys in the comics. Not exactly a heroic transformation, but a reluctant admission that he can make friends and be empathetic instead of just ruthlessly working toward his own goals.

In a similar vein, the show is finally hinting at the positive potential of Loki and Sylvie’s chaotic role. Introduced as a familiar crime drama framing device, the TVA is an authoritarian force. Its entire purpose is to control reality by erasing anyone and anything it deems to be unworthy. In other words, precisely the kind of opponent that allows Loki to be the good guy. He and Sylvie are outcasts and rebels, rejecting the paths set out for them by the universe. A refreshing change for the MCU, whose heroes often end up preserving the status quo.