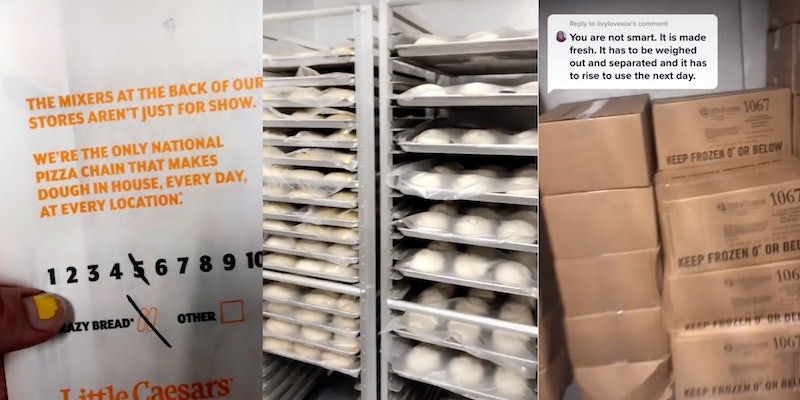 'We're the only national pizza chain that makes dough in house, every day, at every location,' the packaging reads.

A fresh TikToker is joining the trend of shattering the world’s perspective on fast-food items. Numerous fast-food joints have gotten a similar treatment over the last few years, including Taco Bell, McDonald’s, and Panera Bread. Now we can add Little Caesars to the list, thanks to a recent video from TikTok user @mommymilkies42069, who goes by bleep on her page.

It appears, based on the uploads on her page, that bleep is—or perhaps was—an employee at Little Caesars. Her most recent video indicates that she recently headed to college, which may have given her the incentive to post the video despite potential backlash from her employer. While many of the videos on bleep’s page clock in at or under 1,000 views, her Little Caesars videos—of which there are two—both have view counts in the hundreds of thousands. Her first, which features her viral claim, is currently rocking more than 480,000 views.

Both videos were posted in mid-August and quickly prompted a response from viewers.

The first simply begins with bleep reading from what appears to be official Little Caesars packaging. On the back, the package says “the mixers at the back of our stores aren’t just for show,” before going on to claim that “we’re the only national pizza chain that makes dough in house, every day, at every location.”

The TikToker then simply raises the camera to center on a rack of pizza dough, carefully arranged on racks. Bleep steps forward and jams a finger into one of the lumps of dough, which appears to be quite hard, just before the video ends. In the video caption, she notes that “shits frozen.”

Numerous commenters leapt on bleep’s claim about the pizza, sharing in the comments that they are former Little Caesars employees. The majority of them claimed bleep was either wrong or lying, as—in their experience—Little Caesars pizza dough is, in fact, made fresh every day. They shared their experiences of making “buckets of dough” in the mornings, and claimed that bleep was simply showing fresh dough that was being kept in the freezer for later use.

Those that believed bleep had different reactions. A number of commenters couldn’t care less about whether the notoriously cheap pizza joint actually served fresh dough, noting that “I don’t care I just want a hot pizza for 5 bucks.”

Others pointed out that the issue isn’t about the frozen dough, but rather the false advertising. “Its not that I care,” one commenter wrote. “Its that they legally shouldn’t be allowed to say it if it’s not true.”

In response to the wave of disbelieving viewers, bleep uploaded a second video a few days later. The video is directly responding to a user who called bleep “not smart” and claimed that the dough “is made fresh.” The commenter went on to claim that “it has to be weighed out and separated and it has to rise to use the next day.”

The video response is succinct and effective. It sees bleep pulling individual rounds of dough out of a box and placing them on a tray to defrost and rise. Before she places one on the rack, she taps it against the metal tray, effectively proving that the clearly hard ball is thoroughly frozen. She even gives viewers a glimpse of the box she pulled the dough from, which notes that it must be kept “frozen [at] 0 degrees or below.”

Then, just to ensure that she’s proven her point effectively, bleep steps into the freezer, where stacks of boxes await her. When she focuses on one, the package clearly states that it contains “Little Caesars individually wrapped 14oz frozen dough balls.”

The responses to this video were far more accepting, given bleep’s careful attempt to prove the accuracy of her claim. The commenter who called her “not smart” even popped back on to acknowledge her mistake, claiming that “they changed it,” before noting that she “was a manager for 2 years and I made dough every single day myself.” A few viewers encouraged her to apologize for insulting bleep’s intelligence, but she has yet to acquiesce their requests.

Most viewers shared that they never expected Little Caesars pizza dough to be real, and thus weren’t overly shocked or upset by bleep’s big reveal. One person said that bleep could have “told me the entire pizzas come fully-assembled frozen and I still wouldn’t care.”

The Daily Dot reached out to @mommymilkies42069 and Lil Caesars.