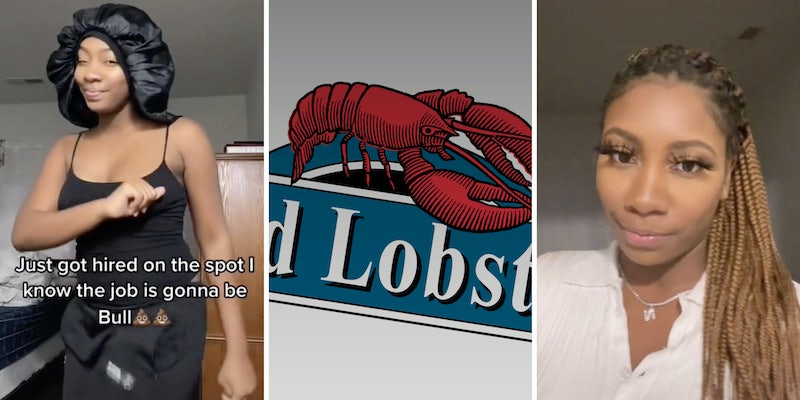 ‘Hired on the spot know the job is going to be bull’: TikToker says she got jumped 3 days in on job at Red Lobster after getting hired on spot

The TikToker said she 'only made $37 in tips that night.'

A TikToker said she got hired, jumped, then fired—all over the course of four days.

The video, which was posted by user @nysenju, is a stitch with one of her earlier videos.

This earlier video shows @nysenju dancing with the text, “Just got hired on the spot know the job is going to be bull.” In the second part of the stitch, @nysenju informs viewers that the job was, in fact, bull. According to @nysenju, within just a few days, she had been both jumped and fired.

In the comments and subsequent videos, @nysenju alleges that this position was at the restaurant chain Red Lobster.

TikTokers were sympathetic to @nysenju’s situation.

“Sis got jumped and lost her job,” one user wrote. “Couldn’t get worst than that.”

But according to @nysenju, it actually could. In a response to this comment, @nysenju said that she “only made $37 in tips that night.”

Later, @nysenju updated curious TikTokers with the full details of the story across several TikToks.

To make a long story short, according to @nysenju, she joined Red Lobster after her sister had been working there for a week.

A few days later, she says another employee at the location began arguing with @nysenju’s sister. @nysenju says she stepped between the two to try to resolve the issue. The other employee, she alleges, then punched her. This evolved into a full-on fight between several employees, she says.

After the fight concluded, the general manager announced that the location was doing an “investigation” into the incident. The investigation ended with everyone involved being fired.

@nysenju also posted photos of her and her sister’s injuries following the fight.

The TikToker says her injuries were less significant than expected.

“Moral of the story is: when you try to diffuse a situation, sometimes it might escalate,” she says in her final video.