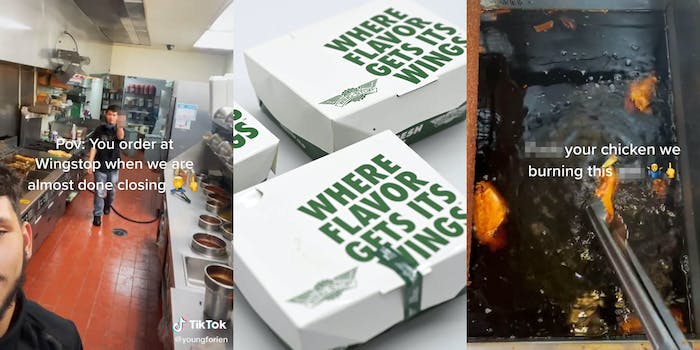 When working in food service, most employees are looking forward to the end of a shift.

If things start to slow down at the end of the day, workers can start cleaning up and doing other closing duties. Needless to say, having to help a customer close to closing time can be a frustrating experience.

One TikToker showed that frustration in a TikTok video on Monday. In the video, the creator records a receipt coming in at his Wingstop job right before the location is about to close.

“[Point of View]: You order at Wingstop when we are almost done closing,” the text overlay reads.

The caption on the video has the hashtag #AllJokes, and it received over 240,000 views. The comments have since been turned off on the video.

However, the TikToker uploaded a second video the same day, and many mentioned his initial video in its comments section.

“Nah don’t turn them comments off stand by what you did,” one person said, to which the TikToker called people “sensitive asf.”

Some commenters said they are on his side.

“We would give em old orders from the morning that never got picked up just put in fryer 30 secs,” one said of their own experience with late orders

“Ong bro I fucken hate people who order 10min before we close,” another wrote.

The Daily Dot reached out to the creator via TikTok comment and Wingstop via its media contact email.