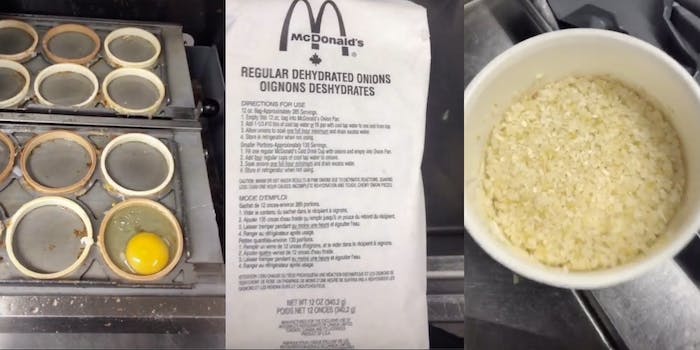 The TikTok page is slowly erasing the mystery.

TikTokers have made a habit, over the last several years, of revealing hacks, recipes, and secrets about their jobs.

We’ve peeked behind the curtain at Hilton hotels, learned how Taco Bell makes its famous beans, and now we know how McDonald’s prepares its onions each morning.

TikTok user @austin.martinn revealed in a recent viral video that the massive chain uses dehydrated onions to populate its burgers. The video, from February, reveals a massive bag of dried onion—equal to 385 servings—as it is dumped into a large bucket. The onions are then drenched in cool water, and after an hour of soaking are added to the assembly area.

The video this week became viral on social media and was signal-boosted by Australia’s News.com.au, making the American user behind the TikTok something of an international star.

Most users weren’t overly surprised by the fast-food hack. Dried onions are a normal part of many recipes, after all, and are not difficult to come by in a typical grocery store. An alleged Subway employee even expressed jealousy, writing “& here I am at Subway, CRYING, slicing onions at 6AM!!”

The video has garnered nearly 400,000 views but pales in comparison to one of @austin.martinn’s other McDonald’s videos. The majority of his TikTok page appears dedicated to unveiling the mysteries of the burger chain. In his most popular video, which has been viewed more than 1 million times, he reveals how McDonald’s prepares the eggs for its popular Egg McMuffins.

Users appeared shocked to discover that McDonald’s actually uses fresh eggs each morning. In a surprisingly hypnotic video, @austin.martinn cracks eggs into simple, round molds, breaks each yolk, and then presses down the top of the machine to cook the eggs through. Other McDonald’s workers noted his lack of blue gloves in the videos but confirmed that McDonald’s does, in fact, serve fresh eggs. For the first few hours of the shift, at least.

Other videos on @austin.martinn’s page show the process of filling large orders, how Junior McChickens are prepared, and employees goofing off and having fun. It’s a wholesome and educational window into the world of Mickey D’s.