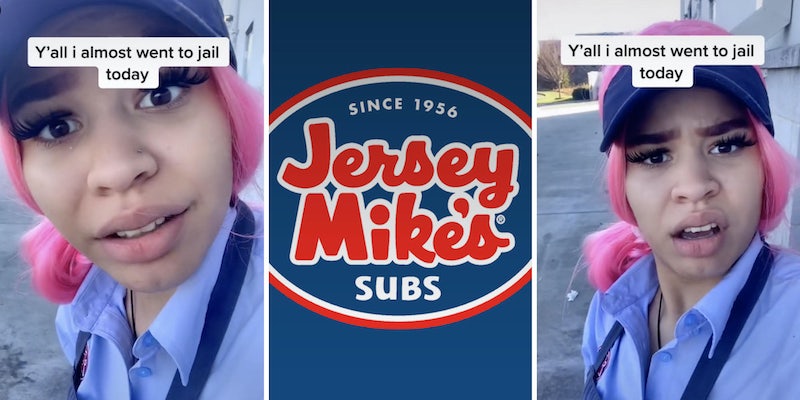 ‘You’re going to come in here being racist, too? Over some vegetables?’: Jersey Mike’s worker says customer berated her over sandwich toppings

'I would’ve gladly lost my job and went to jail.'

A Jersey Mike’s employee says that a customer was racist toward her after there was a miscommunication about the toppings on their sandwich.

In a TikTok posted on March 14, Jersey Mike’s employee and TikToker Raniyah Brown (@raniyah..brown) says that after the customer ordered a sandwich, she asked her if she wanted anything else. The customer says “no that’s all,” and Brown says she started to ring her up at the register.

The customer then says “you didn’t put any toppings on my sandwich,” and the TikToker responded saying that she asked the customer if she wanted anything else, according to Brown.

“She was like ‘I didn’t know you meant toppings.’ I was like ‘OK, you don’t have to be rude. What toppings would you like?'” the TikToker recounts in the video, which has been viewed over 5 million times. “And she was like ‘Rude? You need to do your job, you’re getting paid minimum wage looking ratchet as fuck. Black people.'”

Brown said that when she asked the customer what she just said, she responded saying “did I stutter? Black people.”

“And now you’re gonna come in here being racist, too? Over some vegetables?” the TikToker says in the video.

When she asked why her race had anything to do with the situation, Brown says that the customer told her she was “making all Black people look bad” because she was acting “lazy as fuck, rude as fuck, can’t do your job.”

Brown captioned the video saying that she doesn’t “get paid enough for this.”

Commenters on the video were was heated as the TikToker was about the customer’s racist comments.

“That would’ve been the day I get fired,” @comfycrochetbykatie wrote.

“You’re a saint, I def would’ve lost my job over that,” @uhhvayyuhh commented.

Others suggested that she should have refused to serve the customer.

“And that’s when u pull the ‘I refuse to serve u’ card,” @mermaid.moon.magi wrote.

“I would have canceled the order,gave her a refund and if she made a scene I would have called the cops,” @barbaraemmanuella commented.

Brown told the Daily Dot that her manager ended up serving the woman. “My manager refunded her order, gave her her food for free, and sent her on her way,” she said.

Brown posted another video in response to a racist comment she received on her original TikTok, and in the caption, she explained that she can’t post anything else about the situation.

“I can’t post part two until I resolve this with corporate,” the TikToker wrote. “My store found my TikTok.”

The Daily Dot has reached out to Jersey Mike’s through the company’s media contact form.