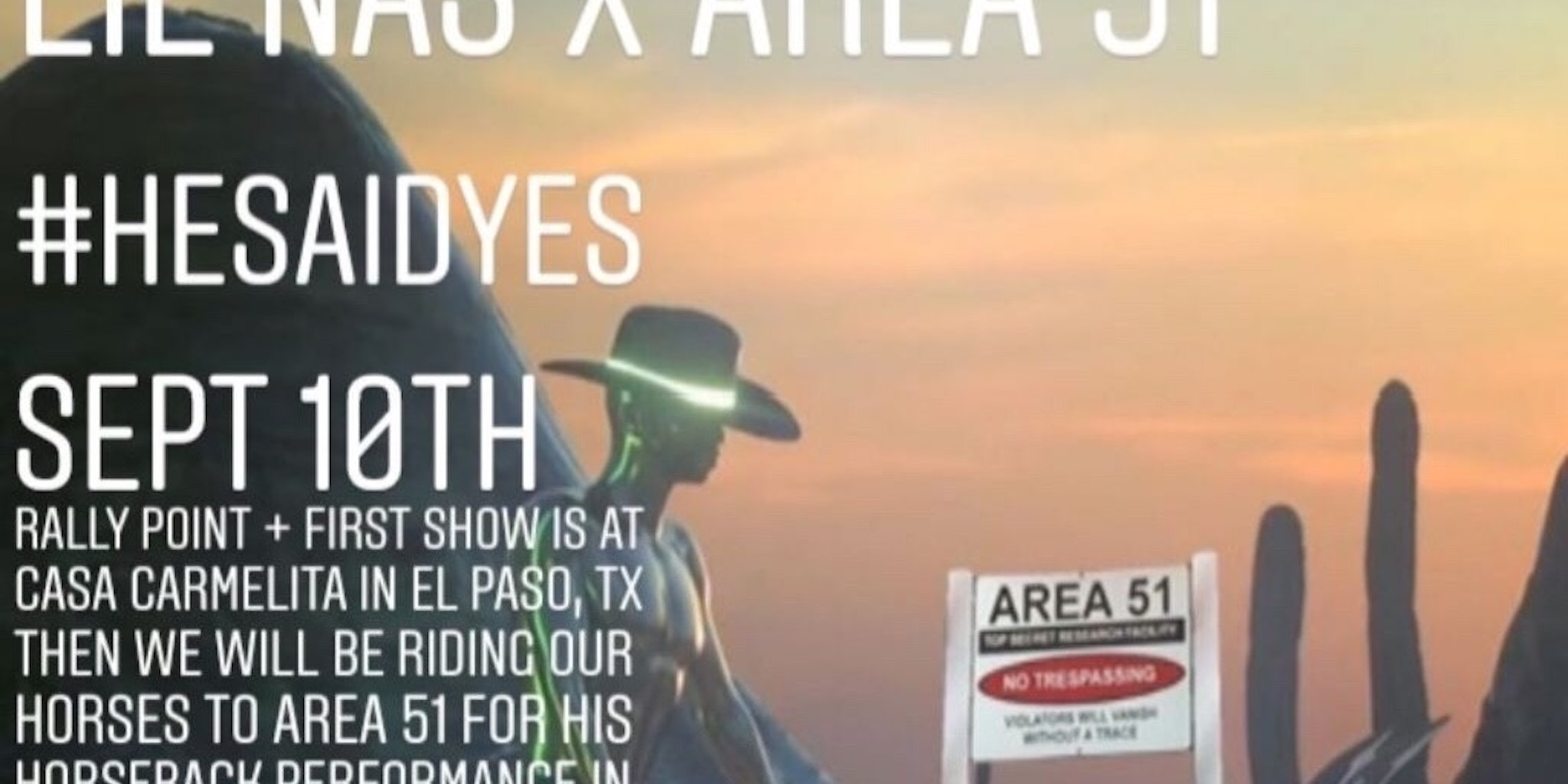 With Lil Nas X onboard, we might finally get to see them aliens.

After being made aware of a GoFundMe page to have him perform at Area 51, Lil Nas X tweeted that he would do the concert for free.

If you’re a little confused by this, that’s only natural. Let’s break it down.

Last week, a Facebook event called “Storm Area 51, They Can’t Stop All of Us” went viral. The name is pretty self-explanatory, and the event is currently set to take place between 3am-6am on Friday, Sept. 20. It’s pretty obvious from the event description, and a pinned post from July 5, that the event was created as a joke.

We will all meet up at the Area 51 Alien Center tourist attraction and coordinate our entry. If we naruto run, we can move faster than their bullets. Lets see them aliens.

Ok guys, i feel like we need to formulate a game plan, Ive put together this easy to follow diagram here for a proposed…

P.S. Hello US government, this is a joke, and I do not actually intend to go ahead with this plan. I just thought it would be funny and get me some thumbsy uppies on the internet.

To anyone actually thinking of storming area 51, there isnt any UFO’s or anything of extraterrestrial origin there its a research base, this has been confirmed by Bob Lazar (if you dont know who he is, google him).

Once you factor in that one of the hosts for the event is a meme page called “Shitposting cause im in shambles,” it’s pretty clear that this all fun and games.

Well, now 1 million people have responded that they are “going” and over 900,00 have marked themselves as “interested”. (Honestly, who wouldn’t be?) Most of these respondents are no doubt in on the joke, but with that many people, more than a few wingnuts are certainly in the mix, so it’s kind of hard to predict exactly what’s going to go down between 3 and 6 in the morning on Sept. 20.

One possibility is a free concert featuring Lil Nas X.

Yesterday, someone created a GoFundMe page entitled “GET LIL NAS X TO PERFORM AS WE STORM AREA 51“. Once again, the page’s description and its outlandish $100,000 goal indicate that the creator was having a laugh.

Let us pool resources for our final rodeo:

On September 20th, we’re taking our horses to Area 51 to see them aliens.

If we can raise $100,000 before then, we are going to book Lil Nas X to perform, on horseback, just outside of the compound. The concert will be free to every brave bastard who made the trip.

Although they did add that if they fail to meet the $100,000 goal, any money raised will go to help migrant families, and that part, at least, we can assume is true.

If we cannot raise the full amount to book Lil Nas X, or if he is unavailable, all funds raised will be donated to Casa Carmelita, a new community space in El Paso, TX that provides support to migrant families.

But the internet is the internet, and anything can happen. Twitter user Jake Capano, who also happens to be a United States Marine, asked the rapper if he was “down”. 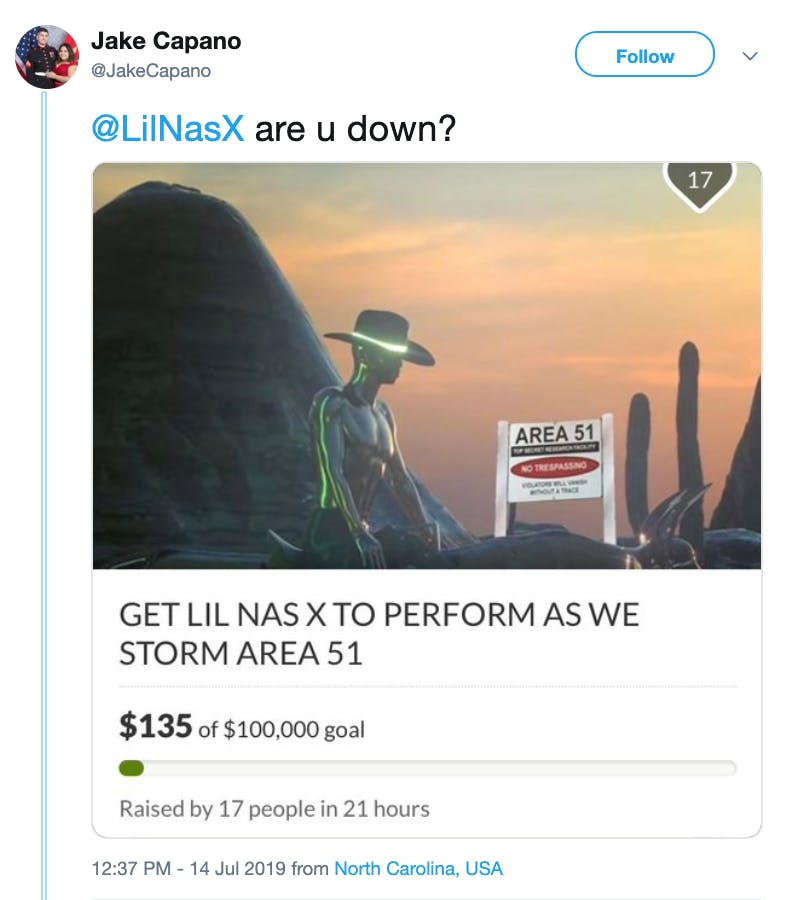 And Lil Nas X, who knows how viral internet moments work better than probably anyone on the planet, replied that not only was he down, he would do the show for free. 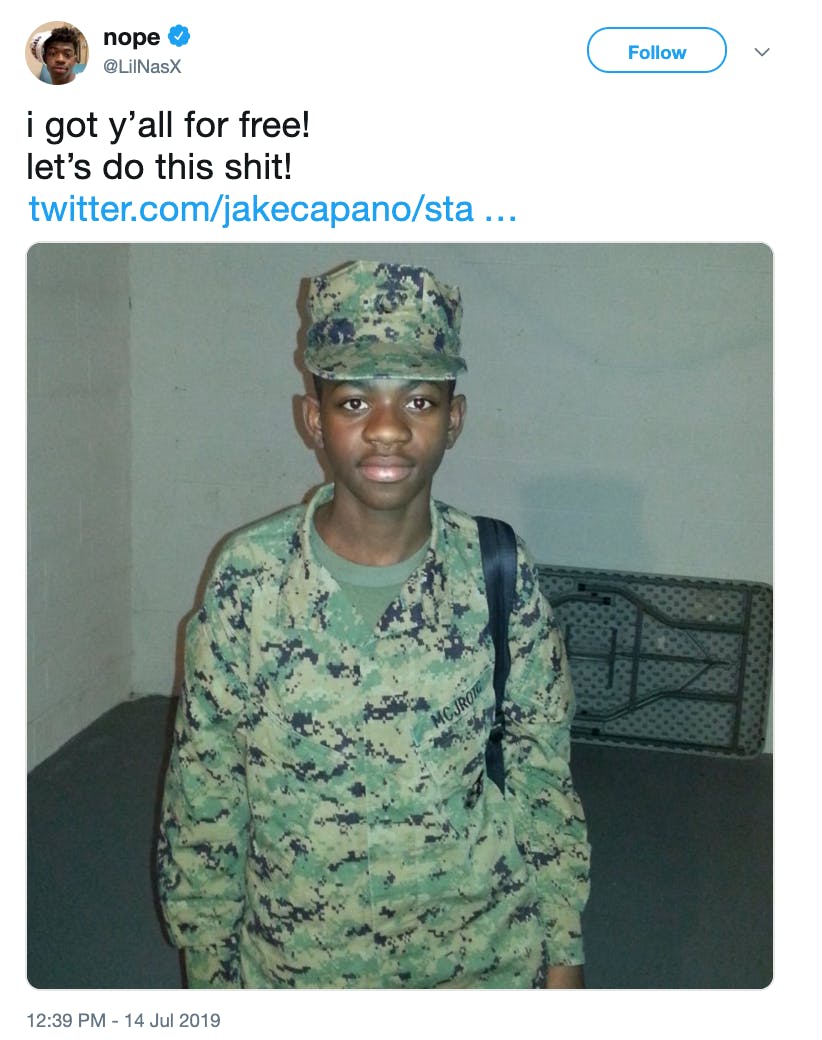 Now thus far the GoFund me page has raised a mere $300 from 30 donors but with Lil Nas X onboard, all that could change.
So what will actually happen in the wee hours of the morning on Sept. 20? At this point, it wouldn’t be that surprising if aliens showed up on horseback wanting to see a free show.
Obviously, The Daily Dot will keep you posted if that, or anything else crazy, goes down.
READ MORE:
Share this article