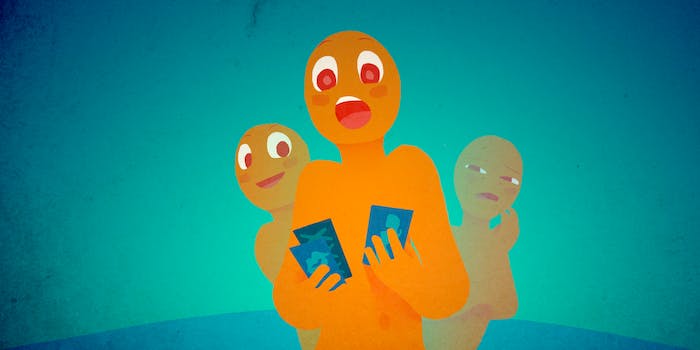 Some things used to be easier—and some were a whole lot harder.

A buddy of mine recently wondered on Twitter whether his readers would, with access to a time machine, prefer to travel forward into the future or return to the past. To me, the answer was simple: I’d go back in time, specifically to the 1940s, so I could see how my grandparents lived in their younger days.

What did they do at night without a TV to watch? How did they get around the city in which they lived? What kinds of clothes did they wear? What kind of food did they eat? Basically, how did they live?

Sometimes, I wonder if my future grandchildren will ponder the same about growing up in a time before there was such a thing called the internet. How did Papa Josh spend his time when he was growing up in the 1980s and ’90s? How was he ever comfortable driving a car by himself? How did he show all of his friends every photo he ever produced? How did he ever complete his chore list without the aid of an army of spider robots?

In case those questions ever need to be answered, here’s what I know about a childhood that wasn’t spent typing on the computer, searching for a Wi-Fi signal, or uploading everything to the cloud. Here’s what it was like to grow up on the tail end of Generation X.

On the shelf in my parent’s den was a full set of the World Book Encyclopedia. These books were red, with gold lettering on the cover, and they were beautiful. They also were the lifeline you needed whenever you had to write some stupid 7th-grade paper on the origin of Czechoslovakia.

Since Google didn’t exist—hell, this was years before Ask Jeeves or AltaVista, even—I’d have to shuffle over to the den, pick out the Ci-Cz edition of the World Book, and flip to the back of the volume. Search complete, right? Not exactly. Since there were no keyboard shortcuts to speed things up, we’d have to actually make a Xerox copy of the info we needed (probably at the library, for a quarter) or we had to—gulp—copy it out by hand. Since Siri didn’t exist, we couldn’t simply ask our corded landline phones when that ruddy, good-looking businessman Donald Trump had been born. We’d have to crack open the T edition and find out ourselves.

Thinking back to these moments from our current moment, life in those days seems pretty damn brutal.

2) Checking out a library book could be complicated

Nowadays, you don’t ever need to step foot into a library in order to read a book for free. Libraries have digital downloads you can check out, and even if you don’t have a Kindle or a smartphone, you can look up whatever book you need online and then simply have the library system deliver it to whatever branch is most convenient for you. But before the internet, there were things called the Dewey Decimal System and the card catalog and… well, to be honest, I barely remember how it all worked.

Luckily, the internet has remembered for me. If the internet didn’t exist, hell, I’d probably have to go to the library to reminisce about how we used to find books.

3) Getting paid by check was a disaster

If you were a babysitter or held any kind of part-time retail job, it was preferable to be paid in cash, because if you were given a check, you’d need to spend time actually turning it into money you could use. Most likely, you’d have to find the nearest bank, endorse the check, and get the teller to run it through the bank’s system before finally pocketing your cash.

A couple months ago, I had an epiphany regarding the babysitters we use for my children. Since we pay our babysitters by check—yeah, we still have a checking account and everything—I wondered if we should offer to pay them in cash or by PayPal or Venmo or some other app that I don’t know about. So, I asked.

“Nope,” one of our babysitters said. “A check is fine.”

“Yeah. I just go and deposit the check on my phone. It’s so easy.”

4) Nobody complained about ‘spoilers’

It was much harder, before the internet, to accidentally find out what happened at the end of Empire Strikes Back before actually watching it. In the 21st century I accidentally find out the results of the boxing event I’m DVRing because one of my dumbass friends on Facebook haphazardly jokes about it 10 minutes after the fight is finished. You either have to be vigilant about not discovering the results of that movie or that sporting event or that Game of Thrones episode, or you have to say: “Screw it, if I find out, I find out.” Now, my young children know that Darth Vader is Luke Skywalker’s dad even though they’ve never seen any of the Star Wars movies. It’s a more intelligent world, perhaps, but one that has significantly less suspense.

The internet, for better or for worse, makes us aware of every terrible opinion everybody in the world has on every conceivable subject. It’s a disaster. In our simpler times, you actually had to seek out those hot takes, either via AM talk radio or the letters-to-the-editor section of the local newspaper. And even then, the opinions weren’t quite as despicable. Probably because it took more effort to find a pen, paper, and a mailing address to send a letter to the editor, and it was more work to track down a radio program’s phone number and then have to wait on hold for hours in order to have your two minutes of talking time. Now, you can just immediately vomit up whatever you want online, and people have to read it while holding their noses.