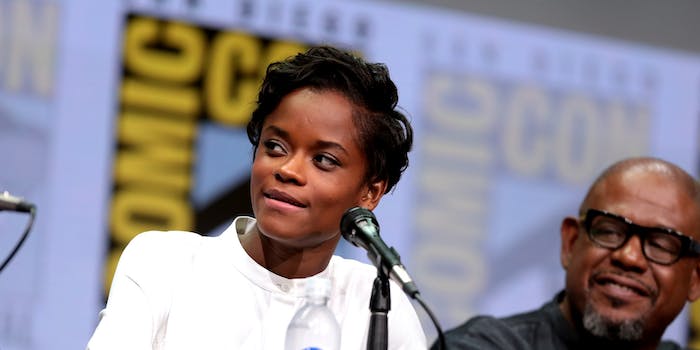 Posted by the YouTube talk show On The Table, the video is titled “COVID-19 VACCINE, SHOULD WE TAKE IT?” The hour-long video raises unfounded concerns about the safety of vaccines and the contents of COVID-19 vaccines specifically. It also includes some transphobic comments from host Tomi Arayomi, who is described as “an internationally received and recognised Prophet, Speaker, Author and Founder of RIG Nation, a media platform with the Christian mission.”

After sharing the video on Thursday, Wright followed up with a tweet saying, “if you don’t conform to popular opinions. but ask questions and think for yourself….you get cancelled,” followed by a cry-laughing emoji.

This opinion came as a shock to many of Wright’s fans. While she’s widely recognized for playing Shuri in Black Panther (and more recently for her work in the acclaimed British drama Mangrove), she’s not the kind of celebrity whose personal life and values are routinely covered in the press. Her social media feeds mostly focus on her career and her Christian faith. Last month she faced some criticism for liking tweets from anti-vax conspiracy theorists and Jackie Hill-Perry, a poet and rapper who identifies as “ex-lesbian” and says that God turned her straight. But these mostly flew under the radar, because Wright’s Twitter likes are not exactly front-page news.

Wright responded to the vaccine controversy by arguing with people on Twitter, saying that “qualified doctors” “got cancelled” and had their videos “taken down” for voicing doubts about vaccination. She didn’t go into specifics.

In reality, there’s no meaningful pushback against vaccination in the mainstream medical community. There’s also no evidence that a COVID-19 vaccine will pose any danger to the public. At the moment, there are several COVID-19 vaccines in various stages of testing and development, and that testing stage literally exists to make sure the vaccines are both efficient and safe. The anti-vax movement is based on conspiracy theories and misinformation, and it’s causing serious concerns during the pandemic, overlapping with the anti-mask movement.

It’s surprising to see this kind of controversial commentary from a Marvel star, since most MCU actors have a PR-friendly presence on social media. Anti-vax sentiments are the kind of hot-button topic that could potentially damage Wright’s role in the franchise, especially considering her character’s depiction as a scientific genius.

So far, only one of Wright’s Marvel co-stars has reacted to her tweets. Iron Man actor Don Cheadle described the anti-vax video as “hot garbage,” saying, “i would never defend anybody posting this,” while also making it clear that he didn’t want to “throw away” Wright or start any fights on social media.