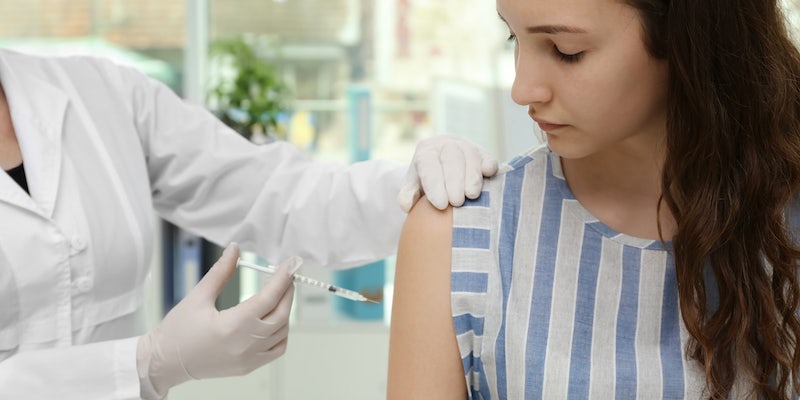 They're taking their health back into their own hands.

As a kid, Ethan wasn’t allowed to be vaccinated. Ethan’s parents are one of the up to 10 percent of Americans who are against some form of vaccination, often believing that preventing disease in children is a government conspiracy.

But Ethan is not his parents. When he turned 18, he decided to take matters into his own hands. He wasn’t sure where else to begin, so he turned to Reddit.

Ethan’s post flooded with over 1,000 comments from users offering their encouragement and support, along with practical advice.

“Good on you for getting your vaccinations,” one user responded. “It’s never too late and you’re not only protecting yourself but those around you who truly can’t get vaccinated.”

Ethan told the Daily Dot that some redditors even offered to give him money via GoFundMe or PayPal if insurance didn’t cover the shots. “People were really supportive, and that was really cool,” he said. “I had the blessing of Reddit. They were supporting me on a decision my mom freaked out about.”

Ethan is not alone. More and more teens are turning to places like Reddit to seek out information on where and how to get vaccinated, and if it’s too late.

“As the child of anti-vaxxer parents, what vaccines should I get now as an adult?” another Reddit user asked. “I feel like my parents used me as a test subject for their beliefs. I don’t want to get sick and die from a preventable disease.”

“Parents are antivaxx, trying to get vaccines without their consent,” yet another wrote. “I haven’t got vaccines since elementary school, Dad fell down the conspiracy theory rabbit hole, and my Mom agrees with him. Any and all advice is appreciated.”

The good news is it’s possible for an 18-year-old to get caught up on all the vaccines they’re due for, according to Dr. Bennett Kaye, a Chicago-based pediatrician. But that’s if you haven’t already contracted diseases like mumps and measles.

“It’s better late than never, but unfortunately some people who wait too long don’t get the opportunity to catch up,” Kaye told the Daily Dot. “If they’re fortunate, they didn’t succumb to one of those diseases during childhood, going into adulthood, we could protect them.”

It becomes trickier if you want to get vaccinated as a minor. Laws vary state to state and usually depend on what kind of minor you are: emancipated minor, married minor, pregnant minor, or minor parent. In some states, you can give your consent to getting vaccinated if you are a mature minor, or “someone who is old enough to understand and appreciate the consequences of a medical procedure,” according to Vaxopedia.

“So everyone has to check their own state rules. If you’ve got a pediatrician, I would go to your pediatrician and have a serious discussion about how to get vaccinated,” Kaye said.

Ethan’s mother “kicked and screamed” when he told her about his intent to get vaccinated, but he went ahead with it anyway a few weeks after posting to Reddit and conducting rigorous research of his own. He was even able to use his family’s insurance to cover the costs.

“I would never want to be the reason that another person got a disease,” he said. “You’re protecting your life, you’re protecting other people’s lives and that’s enough reason to do it.”

While the internet was the place Ethan turned to in his time of need, it’s also the same place his parents, and many others like them, stumble upon a sea of misinformation.

For decades, the existence of the anti-vax movement seemed almost like a conspiracy theory itself, something you’d hear about in fringe parent circles. But with the dawn of the internet, all that changed. The anti-vaccination community’s online reach is now far, and it is fierce. There are hundreds of anti-vaccination websites claiming vaccines are a government conspiracy, that they cause autism or brain injury.

Anti-vaxxers have also mastered the art of social media, where they effectively disseminate misinformation via platforms like Facebook, Instagram, Twitter, and YouTube. Ethan said his mom is part of many online social groups, with many of them relating to “mothers against vaccines,” and he often sees her posting about how vaccines are a government conspiracy and harmful on Facebook.

“My mom would publish and share videos, articles, and stuff like that about vaccines being bad,” Ethan said. “It’s almost as if she had been radicalized, or indoctrinated at some point. She holds that stuff as gospel.”

Ana Lucía Schmidt, a co-researcher of the seven-and-a-half-year study “Polarization of the Vaccination Debate on Facebook,” told the Daily Dot that the anti-vaxxing community’s social media usage is a classic example of confirmation bias.

“People don’t open their minds to other narratives, they just double down on their beliefs,” Schmidt said. “We seek out information that tells us we are right, and we ignore everything else that tells us we are wrong. And with Facebook, it is really easy to do this, because it is just a matter of searching.”

The effects of spreading misinformation are being felt, too. Just this year, the World Health Organization (WHO) released its list of 10 “threats to global health in 2019” list, and “vaccine hesitancy” was among the list of threats. According to the Centers for Disease Control and Prevention, 2018 has been one of the worst years for measles in history. At least 107 cases of measles across 21 states have already been reported this year.

“My mom is someone who very much loves her children,” Ethan said. But when it comes to his younger brothers, he continued, “it breaks my heart that they’re at danger of contracting something like measles, it’s just really sad.”