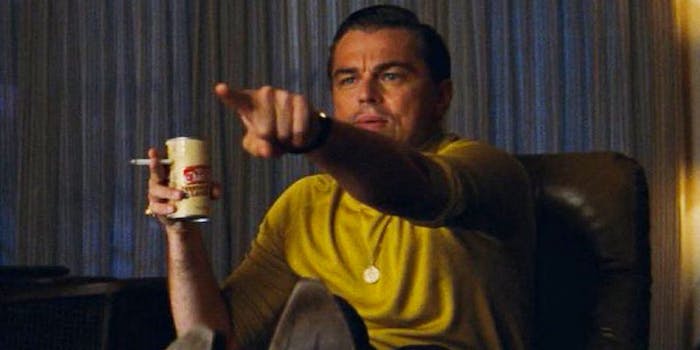 The Leonardo DiCaprio pointing meme has many uses

Quentin Tarantino’s epic 2019 film, Once Upon a Time in Hollywood, tells the tale of sad, washed-up golden-era actor Rick Dalton (Leonardo DiCaprio) struggling to make his career comeback alongside his friend and stunt double Cliff Booth (Brad Pitt)—that also weaves in some wild revisionism about the Sharon Tate murders. At one point in the nearly three-hour opus, DiCaprio’s character guest stars in an episode of The F.B.I., and later—while watching with Booth—he excitedly points at the television when his scene is about to come on. Leo pointing at himself seemed all but destined to become a meme, and now, friends, that day has arrived.

Know Your Meme dates back the earliest known instance of the image of Leo pointing being used as a meme to March 1. User @Kee_Bully19 tweeted: “Me throughout watching The Invisible Man,” referring to the 2020 reboot starring Elisabeth Moss.

New life was breathed into the “Leo Pointing” (conversely, “Pointing Rick Dalton”) meme this week, however, when Late Night with Seth Meyers writer Mike Scollins tweeted the image with the caption: “When someone says the title of the movie in the movie.”

The tweet quickly went mega-viral, accumulating over 430,000 likes and 70,000 retweets (at the time of this writing), and others began adding their own contributions. Some roasted DiCaprio’s penchant for dating much, much younger women, while others roasted their own viewing habits.

The Americana at Brand Memes Twitter account used the Leo Pointing meme to describe the exhilarating feeling one gets when first spotting a cheesecake during a trip to The Cheesecake Factory.

If nothing else, the Leo Pointing meme seems particularly relevant in this bizarre, quarantined world we’re currently living in—given that many of us have little else to do but sit in front of the TV, and well, maybe even point at some stuff now and then.