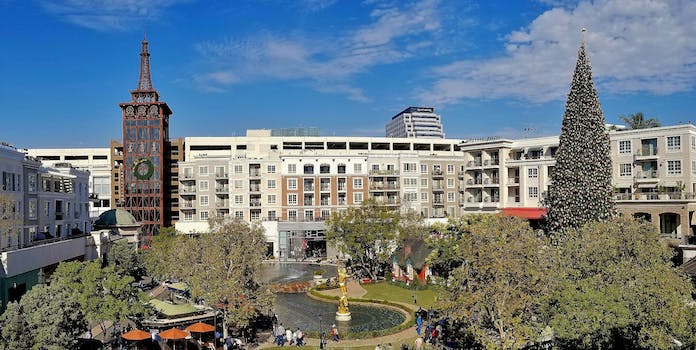 This meme page about a mall is weirdly comforting

A co-creator talks to us about the very niche account.

If someone likes something, there are memes about it.

While the internet at large is being gobbled up by massive corporations and becoming reduced to only a handful of websites that we all live on, memes accounts are getting more specific. There are groups for truck driver memes, postal worker memes, and even molecular biology memes. Think of the most obscure television show or film you’ve ever heard of, and it won’t take you long to find memes to go along with it.

A few weeks ago, the account started posting exactly what it advertises: niche memes about a suburban outdoor shopping mall in Glendale, California—a city in the Los Angeles area.

The Americana is a fairly upscale mall—the kind with an Apple Store, David Yurman, and a Tesla dealership. There is also some lovely outdoor space, a fountain, and telephone poles that magically blast Frank Sinatra tunes. But, if you take away the morning stroller mom yoga sessions and the actors drinking lattes outside of Le Pain Quotidien between auditions, it is a mall just like any other.

There is inherent humor in the incredible specificity of these Americana at Brand memes, built for only a small group of people to understand—currently, the account has a little more than 3,000 followers—and that’s a big part of its appeal.

Three L.A. comedians are behind the account and prefer to remain anonymous to better preserve the conceit of @americanamemes. The Daily Dot caught up with one of them last weekend at BugCon, a very online convention, that was also in many ways a parody convention, held at the Burbank Airport Marriott.

“I saw a bunch of niche memes accounts,” a co-creator of @americanamemes told the Daily Dot. “There were ‘People Who Work At Movie Theater Memes.’ A lot of the jokes were about how Yahoo.com has wrong movie times and people come in expecting those movie times. It was so niche that I had to find out what those memes meant. My wife is from Saranac Lake, a tiny little town up in the Adirondacks in New York, and they have a meme account. It’s so niche that I was immediately like, ‘Oh I should start something like this making fun of memes and stuff.’”

The Americana at Brand memes are built on genuine love for the shopping center.

“It’s the best,” the co-creator said. “All of our love for the Americana is very earnest because I think we all like to think of it as a free Disneyland. There’s a trolley you can ride for free. There is a beautiful fountain show. I honestly don’t like malls for the most part, but I love going to the Americana just to walk around.”

In the time since the account was created, an ecosystem of accounts paying homage to other L.A. area malls (and getting in on @americanamemes bit) have popped up. The mall right next store to the Americana, Glendale Galleria, has an account (@GalleriaMemes), as does Burbank Town Center (@BurbankTown), The Beverly Center (@BevCenterMemes), and new area malls are being memed every day.

“You can take [what we’re doing] as an alt-comedy thing,” the co-creator of @americanamemes said. “But also people who aren’t into comedy and don’t have any sort of theories on comedy follow the account and genuinely love it for what it is. There is someone who works at the concierge at the Americana and she is always tweeting at the account like, ‘tweet about the concierge again.’ People genuinely like it and aren’t comedy snobs.”

The Americana at Brand meme account speaks to something going on in internet culture. As corporate consolidation ravages the web and a feeling of alienation sweeps both online and IRL, and as technology marches forward and tames an internet that once felt like the Wild West, there is a real hunger for something relatable yet personal.

While one of the creators behind @americanamemes is happy to talk about the state of comedy and Twitter, they stop short of making any grand pronouncements about what their account says about the world beyond the Cheesecake Factory and the Sprinkles Cupcake ATM.